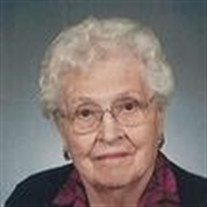 Myrna Johnson, 98, of Redwood Falls died Tuesday, May 10, 2011 at Seasons in Redwood Falls. Funeral services will be held at 10:30 a.m. on Friday, May 13, 2011 from First United Methodist Church in Redwood Falls with Rev. Janiece Redman officiating. Burial will follow in the Slayton Cemetery. Visitation will be held Thursday, May 12, 2011, from 5 until 7 p.m. at the Nelson-Martin Funeral Home in Redwood Falls and will continue on Friday at the church for one hour prior to services. Arrangements are with Nelson-Martin Funeral Service of Redwood Falls. E-mail condolences may be sent via www.nelsonmartinfuneralservice.com. Myrna M. Johnson, the daughter of Loren E. and Ida Luenburg Ballinger, was born January 28, 1913 in rural Heron Lake. She spent her youngest years in rural Heron Lake, moving to rural Slayton with her family when she was eight years old. Myrna received her elementary education in Murray County Rural School District 2 and 3. She graduated from Slayton High School in 1935 and from the University of Minnesota “Aggie” School in 1937. Myrna returned to Slayton where she worked with USDA and other Federal entities, and then with the University of Minnesota Extension program, primarily as the 4-H club leader. On June 11, 1955, Myrna married Ernest D. Johnson at Carver and the couple set up housekeeping in Slayton. They relocated to Redwood Falls in 1958 where Myrna was actively involved with the Girl Scout program and Ernie worked as the County Extension Agent. They retired together in 1979. Myrna was a member of First United Methodist Church in Redwood Falls. She was very active and held many different offices in church and the United Methodist Women. Myrna was also a member of the church choir. She belonged to the General Federation of Women’s Clubs and several auxiliaries in the community. Myrna was active in the local senior citizens’ organization and was named Redwood County Outstanding Senior Citizen in 2001. She is survived by her niece Sharon Ballinger Westerlund of Ham Lake; grandnieces and nephew Wendy Parent, Jody Napoleon, and Troy Westerlund; and great-grandnieces and nephews Kayla, Cole, Tara and Carly Westerlund; Paige, Austin, McKenna, Blair and Boden Parent; and Juliana and Abigale Napoleon. Also surviving are stepsisters Thelma Onken of Slayton, Lorane Onken of Windom, and Lois Berg of Apple Valley; sister-in-law Arlene (Howard) Ballinger Johnson of New Brighton; cousin Kathy Beckman; many nieces and nephews, grandnieces and grandnephews, and step-nieces and nephews. Myrna was preceded in death by her husband Ernie in 1995; her father Loren Ballinger in 1975; her mother Ida Ballinger in 1949; her brother John Raymond Ballinger in 1944; her stepmother Martha Ballinger; her stepsisters Evelyn Meyers and Lucille Olson; and her stepbrothers Wilber and Harold Paden. Blessed be her memory.

Myrna Johnson, 98, of Redwood Falls died Tuesday, May 10, 2011 at Seasons in Redwood Falls. Funeral services will be held at 10:30 a.m. on Friday, May 13, 2011 from First United Methodist Church in Redwood Falls with Rev. Janiece Redman officiating.... View Obituary & Service Information

The family of Myrna M. Johnson created this Life Tributes page to make it easy to share your memories.

Send flowers to the Johnson family.