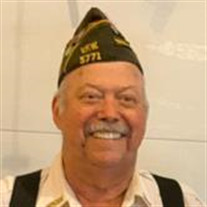 Michael Gilbert Larsen passed away from cancer at age 69 surrounded by his family on Thursday, September 17, 2020 in the comfort of his home. Mass of Christian Burial will be held at 1:00 p.m. on Tuesday, September 22, 2020 from St. Michael’s Catholic Church in Morgan with burial to follow in St. Michael’s Catholic Cemetery, Morgan with full Military Honors. Visitation will be held Monday, September 21, 2020, from 4 until 7 p.m., with prayer service at 6:30 p.m. at St. Michael’s Catholic Church in Morgan and will continue on Tuesday, from 12 until 1 p.m., at the church. The family prefers memorials to the We Care Food Shelf in Morgan. Arrangements are with Nelson-Hillestad Funeral and Cremation Service of Morgan. E-mail condolences may be sent via www.nelson-hillestad.com. Mike was born on January 10, 1951 in Redwood Falls, MN to Gilbert and Mary Ann (Schwab) Larsen. He graduated from Morgan High School in 1969 and went onto bootcamp with E. Company 1st Battalion at Camp Pendleton serving with the United States Marine Corp. He graduated sniper school in 1971. He was very proud to have served his country in the Vietnam War. Mike had many jobs over the years working with his brothers at Triple L Construction, owning and operating the Pool Hall, he founded the Minnow Trap Company, and farming with his friends. He retired in 2003. He married Sandy (Hacker) Larsen in 1976, later divorcing but still remained friends. He enjoyed cooking and baking for family and friends, gardening and canning and sharing all of the produce before and after canning and making Grandpas Jam that his grandkids sold each summer. He loved hunting, fishing, trapping and spending time mentoring his grandkids on all the ins and outs and special secrets of the lake of the day that had the best fishing. He enjoyed visiting with EVERYONE about EVERYTHING. He was an active member of St. Michael's Catholic Church serving as an usher and leading the making of the beef and sausage at the church dinners for many years. He was a member of the Knights of Columbus and the VFW POST 5771, the Clements Legion and the New Ulm DAV. He also enjoyed helping the We Care food shelf that his mother started years ago. He started the Memorial Day tradition of hosting a potluck at his home after the service that he was always involved in, he thoroughly enjoyed the visits with all the service men and women and their families. He was known for his awesome baking and his kind heart. He was generous to others in his visits and kind words or maybe even a loaf of banana bread or fresh baked rolls. He was an amazing Father, Grandpa, Brother, Son, Uncle, Friend and Veteran. He always had a friendly wave and smile to offer as he religiously did his drive byes. Mike is survived by his 4 daughters - the Larsen Girls. Stephanie (Eric) Cornwell, Christie (Ryan) Rudenick, Jessica (Shawn) Guetter all of Morgan and Audrey (Nick) Gleason of Waconia and 12 grandchildren Tristan and Kaleb Cornwell, Kayla and Ethan Rasmussen, Alison and Leah Rudenick, Austin, Aidan, Jack and Grace Guetter and Nicholas and Grady Gleason. He is also survived by his brothers and sisters, Anne (Alan) Wenisch, Joe Larsen, Jim (Pauline) Larsen, Rita (friend Hans) Gewerth, Ken (Barb) Larsen, Theresa (Jim) Dittbenner, Tim (Kim) Larsen, Pat ( Mary Kate) Larsen, Jeanie (Gene) Penning, Joan (Rick) Wenisch and many nieces and nephews and Marine Corp Family. He was preceded in death by his parents Gilbert and Mary Ann Larsen, nephew Nicholas Wenisch and other family and friends. As Mike would say - catch ya later! Semper Fi

Michael Gilbert Larsen passed away from cancer at age 69 surrounded by his family on Thursday, September 17, 2020 in the comfort of his home. Mass of Christian Burial will be held at 1:00 p.m. on Tuesday, September 22, 2020 from St. Michael&#8217;s... View Obituary & Service Information

The family of Michael Gilbert Larsen created this Life Tributes page to make it easy to share your memories.

Michael Gilbert Larsen passed away from cancer at age 69 surrounded...

Send flowers to the Larsen family.