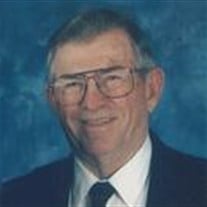 Melvin “Mel” Tauer, 91, of Morgan died Tuesday, August 23, 2011 at his daughter’s home in Babb, Montana. Memorial services will be held at 11 a.m. on Friday, September 9, 2011 from St. Michael’s Catholic Church in Morgan. Visitation will be held at the church for one hour prior to services. Following burial in the church cemetery, a celebration of Mel’s life will be held at Gilfillan Estates. Arrangements are with Nelson-Martin Funeral Service of Morgan. E-mail condolences may be sent via www.nelsonmartinfuneralservice.com. Melvin (Mel) Tauer, the son of Albert and Sophia (Sturm) Tauer, was born August 18, 1920 in Morgan Township, Redwood County. He attended District 51 School and St. Michael’s School in Morgan. He was a member of St. Michael’s Catholic Church. Mel worked on the family farm, south and east of Morgan, with his father. In 1945 he enlisted in the U.S. Army, taking his training at Fort Riley, Kansas. He served with the 1st Cavalry Division and was sent to Japan in the Army of Occupation. On returning home he return he resumed working the farm. He started playing a concertina that his father bought him when he was 12, and it became a lifelong passion. He would play for weddings and parties with his band, the “Blue Birds” and later with “Leonard’s Band.” He planned many concertina jamborees. In 1948 Mel and Lorraine Pelzel were married at St. Mary’s Catholic Church in Sleepy Eye. On the farm they made use of the latest technology, doing general farming, dairy, and some custom work. Five children were born to Mel and Lorraine. A big celebration marked the farm’s becoming a Centennial Farm in 1992. The fifth and sixth generations of Tauers now live on the farm. Mel served on the Morgan Creamery Board and the Morgan School Board. He was an A.S.C.S. committee man for 10 years, a member of the Lions Club, Chamber of Commerce, Knights of Columbus, and St. Michael’s Catholic Aid Society, a board member of the Redwood Historical Society, a life member of Friends of Gilfillan, and a life member of VFW Post 5771, serving as VFW Post Commander and on the Color Guard. After he retired from farming, he restored old cars, buggies and John Deere tractors. Mel loved pulling a sleigh with his Arabian horse and giving Santa a ride around Morgan at Christmas. Fishing and deer hunting were at the top of his list. He also enjoyed trail riding, traveling, and making sausage. He liked to work – and most of all, Mel enjoyed being with family and friends. He was instrumental in acquiring the Gilfillan Farm for the Redwood County Historical Society and spent many volunteer hours there. Making ice cream with ice chiseled from Sleepy Eye Lake the previous winters was one of his many ideas, as was the Fall Festival. The new Tauer Pavilion, his last big project, is named after him. Mel is survived by his wife of 63 years, Lorraine; children Marleen (Jack) Hartjes of Springfield, Dale (Janet Mosman) Tauer of Duluth, Doreen Snyder of Great Falls Montana, Debra (Mike) Thronson of Babb, Montana, and Jerry (Beverly Turbes) Tauer of Delano; 11 grandchildren; 11 great grandchildren; a sister Marie (Virgil) Gluth of Post Falls Idaho; and many nieces and nephews. He was preceded in death by his parents, sisters Irene (Walter) Schmidt, Gertrude (Leo) Koll, and Delores, who died at the age of four; and son-in-law Rod Snyder. Blessed be his memory.

The family of Melvin " Mel " Tauer created this Life Tributes page to make it easy to share your memories.

Send flowers to the Tauer family.