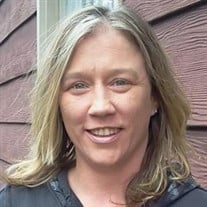 Melissa Bratsch, 42, of Mankato and formerly of Redwood Falls passed away peacefully, following an unexpected cardiac incident, on Wednesday, November 29, 2017 at Mayo Health Systems in Mankato. Visitation will be held Saturday, December 9, 2017, from 10 a.m. until 12 noon, followed by a private service with family and friends, all at Nelson-Hillestad Funeral Home in Redwood Falls. Inurnment will take place in Crestlawn Gardens, rural Redwood Falls. The family requests memorials be made to Duke Memorial Animal Shelter or Gloria Dei Lutheran Church. Arrangements are with Nelson-Hillestad Funeral and Cremation Service of Redwood Falls. E-mail condolences may be sent via www.nelson-hillestad.com. Melissa Ann Bratsch, the daughter of Gary and Marlys (Lightfoot) Bratsch, was born April 28, 1975 in Redwood Falls. She was baptized at St. Catherine’s Catholic Church on May 18, 1975 and confirmed on October 28, 1990 at Gloria Dei Lutheran Church. Melissa grew up in Redwood Falls and received her formal education here, graduating from Redwood Valley High School in 1993. Following graduation, she worked at the SOCS and REM homes in Redwood Falls for the next 12 years. Melissa was married to Doug Neitzel from 2008 until 2011. She relocated to Mankato in 2011. In September of this year Melissa received her bachelor of science degree in psychology. Melissa was proud of her daughter, Marquette, and enjoyed spending time with her and the rest of their family and friends. She enjoyed animals and volunteered at the animal shelter. Melissa also liked to fish and spending time outdoors. She recently purchased a house in Mankato and was enjoying landscaping the property. Melissa loved the Minnesota Vikings. She is survived by her daughter Marquette Bratsch of Sioux Falls, South Dakota, her mother Marlys Larson of Redwood Falls, grandmother Esther Bratsch of Redwood Falls, half-sister Kristi Rasmussen of Maplewood, uncle and aunt Bill and Charlene Lightfoot of Vesta, uncle Jerry Bratsch of Rogers, and many, many cousins. Melissa was preceded in death by her father Gary Bratsch, grandfather Kermit Bratsch, grandparents Lawrence and Lucille Lightfoot, uncle Paul Lightfoot, and a still-born brother. Blessed be her memory.

The family of Melissa Bratsch created this Life Tributes page to make it easy to share your memories.

Melissa Bratsch, 42, of Mankato and formerly of Redwood Falls...

Send flowers to the Bratsch family.