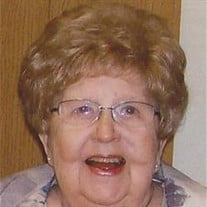 Mavis E. Mumme, 93, of Franklin died Wednesday, May 31, 2017 at Wood Dale Nursing Home in Redwood Falls. Funeral services will be held at 2 p.m. on Tuesday, June 6, 2017 from St. Luke’s Lutheran Church in Franklin with burial to follow in Fort Ridgely Cemetery, Nicollet County. Visitation will be held Tuesday, from noon until 2 p.m., at the church. Arrangements are with Nelson-Hillestad Funeral and Cremation Service of Redwood Falls. E-mail condolences may be sent via www.nelson-hillestad.com. Mavis Elvina Mumme, the daughter of Eberhardt and Molly (Elefson) Coyen, was born November 19, 1923 in Madison, Minnesota. She grew up in Madison and received her formal education there, graduating from Madison High School in 1939. On January 22, 1949, Mavis married Harold Mumme. There was a good-old Minnesota snowstorm that day, so the only witnesses at the ceremony were their attendants, the minister and a mouse that scurried behind the altar. Mavis and Harold made their home in Madison for a year or two, then moved to Franklin. Mavis was a homemaker and later worked as the activities director at Franklin Heights Nursing Home. Mavis was an active member of St. Luke’s Lutheran Church where she taught Sunday School and Vacation Bible School, served on the Altar Guild and belonged to Ladies’ Aid. She was a member of the American Legion Auxiliary, the Franklin PTA, and the Franklin High School Band Mothers. Mavis is survived by her daughter Susan Remus (Jeff Anderson) of St. Cloud; son David (Cindy) Mumme of Redwood Falls; grandchildren Nathon (Debbie) Remus of Sauk Rapids, Mindy (Michael) Rogers of Hudson, Wisconsin, Matthew (Briana) Mumme of Franklin, and Jason Mumme (Bobbie Olson) of Minneapolis; and great-grandchildren Ian and Hailey Remus, Jack and Avery Rogers, Arlo and Cassidy Mumme, and Robert Mumme-Olson. She was preceded in death by her husband Harold, and brother Elvin Coyen. Blessed be her memory.

The family of Mavis E. Mumme created this Life Tributes page to make it easy to share your memories.

Send flowers to the Mumme family.