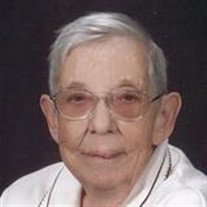 Nora McGowan, 95, of Redwood Falls died Monday, January 17, 2011 at Park Nicollet Methodist Hospital in St. Louis Park. Mass of Christian Burial will be held at 11 a.m. on Friday, January 21, 2011 from St. Catherine’s Catholic Church in Redwood Falls with Father Michael M. Doyle officiating. Burial will follow at Calvary Cemetery, Morton. Visitation will be held Friday, January 21, 2011, from 9 until 11 a.m., at the church. The family requests that memorials be made to St. Catherine’s Catholic Church. Arrangements are with the Nelson-Martin Funeral Service of Redwood Falls. E-mail condolences may be sent via www.nelsonmartinfuneralservice.com. Mary Nora McGowan, the daughter of Montieth and Catherine (Laughlin) McGowan, was born June 28, 1915 in Morton. When she was a young child, Nora moved with her family to North Redwood where they lived for four years. They returned to Morton in 1922 and Nora received her education at Morton Public School, graduating from Morton High School. She received her teacher’s certificate from St. Cloud Teacher’s College and then taught school at Morton, Bird Island, and Waconia for six years. Nora later was employed as a crew chief at Northwestern Bell Telephone Company. She worked for the phone company for 33 years, retiring in 1977. Nora moved to Redwood Falls in 1979. She was a member of St. Catherine’s Catholic Church. Nora is survived by her brother Bill McGowan of Franklin, nieces, nephews, and many friends. She was preceded in death by her parents, four brothers, and her niece Doris McCorquodale. Blessed be her memory.

The family of Mary "Nora" Nora McGowan created this Life Tributes page to make it easy to share your memories.