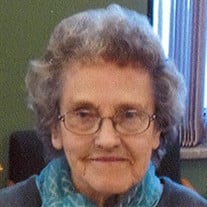 Martha Raddatz, 94, of Morgan died Friday, March 24, 2017 at Gil-Mor Manor in Morgan. Funeral services will be held at 10:30 a.m. on Wednesday, March 29, 2017 from St. John Lutheran Church in Morgan with burial to follow in the St. John Lutheran Cemetery in Morgan. Visitation will be held at the funeral home in Morgan on Tuesday, March 28, 2017 from 5 until 8 p.m. and will continue on Wednesday from 9:30 until 10:30 a.m. at the church. Arrangements are with Nelson-Hillestad Funeral and Cremation Service of Morgan. E-mail condolences may be sent via www.nelson-hillestad.com. Martha Ella Raddatz, the daughter of Henry and Ella (Schultz) Mielke, was born December 24, 1922 on the family farm in Morgan Township, Redwood County. She grew up on the family farm and received her elementary education in Redwood County District 51. Martha graduated from Morgan High School in 1940 and took business courses at Rasmussen College in Mankato. Martha’s mother died when she was only eight years old; her father, Henry Mielke, raised the four daughters by himself with help from their aunt, Alma Schultz Zemple. On January 28, 1948, Martha married Loren Raddatz at St. John Lutheran Church in Morgan. The couple operated the Mielke family farm until moving to Gil-Mor Manor in 2013. Martha was a homemaker and assisted with the farming operation. She was a member of St. John Lutheran Church where she belonged to the quilting group and assisted Loren as financial secretary. Martha belonged to the Gil-Mor Manor Auxiliary and delivered Meals on Wheels. She enjoyed watching the Twins and Wheel of Fortune, crocheting, gardening, canning, quilting and doing crossword puzzles. Martha also enjoyed playing the piano and organ. She is survived by her husband Loren Raddatz of Morgan; children Joanne Robinson of Redwood Falls, Karen (David) Brandel of New Ulm, and Donna (Allan) Lothert of Redwood Falls; seven grandchildren; and six great-grandchildren. Blessed be her memory.

Martha Raddatz, 94, of Morgan died Friday, March 24, 2017 at Gil-Mor Manor in Morgan. Funeral services will be held at 10:30 a.m. on Wednesday, March 29, 2017 from St. John Lutheran Church in Morgan with burial to follow in the St. John Lutheran... View Obituary & Service Information

The family of Martha Raddatz created this Life Tributes page to make it easy to share your memories.

Send flowers to the Raddatz family.