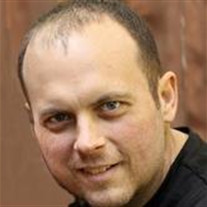 Mark L. Voelz, 38, of Ham Lake and formerly of Morgan died Tuesday, February 7, 2017 at M D Anderson Cancer Center in Houston, Texas. Mass of Christian Burial will be held at 11 a.m. on Tuesday, February 14, 2017 from St. Michael’s Catholic Church in Morgan with burial to follow in the church cemetery. Visitation will be held Monday, February 13, 2017, from 4 until 8 p.m., with a prayer service at 7:45 p.m., all at Nelson-Hillestad Funeral Home in REDWOOD FALLS. Visitation will continue on Tuesday, from 10 until 11 a.m., at the church. Arrangements are with Nelson-Hillestad Funeral and Cremation Service of Redwood Falls. E-mail condolences may be sent via www.nelson-hillestad.com. Mark Lyle Voelz, the son of Roger and Joleen (Schultz) Voelz, was born October 18, 1978 in Mankato. He grew up in Morgan and received his formal education there. Following high school, Mark earned his degree in nondestructive testing from Ridgewater College. He continued to work in that field for his entire career. On January 19, 2002, Mark married Michelle Radermacher in Franklin and they made their home in Mounds View, later moving to Ham Lake. Mark was a member of St. John the Baptist Catholic Church in New Brighton. He loved spending time with his family and also enjoyed hunting, fishing, and golf. Mark loved hanging out with their neighborhood friends. They played cribbage, had bonfires, game nights, barbeques and – of course – watched the game. Mark is survived by his wife, Michelle of Ham Lake; daughters Jordan and Devin, at home; father Roger Voelz of Morgan; sister Tara (Joel) Hammill of Mantorville; and nieces and nephew Easton and Emma Hammill, Mercedes, Willow, and Shiloh Radermacher. He was preceded in death by his mother, grandparents, and nephew. Blessed be his memory.

The family of Mark Voelz created this Life Tributes page to make it easy to share your memories.

Send flowers to the Voelz family.