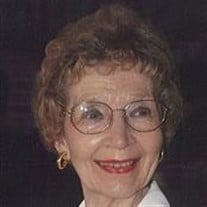 Marita Duckstad, 74, of Redwood Falls died Monday, April 11, 2011 at Seasons in Redwood Falls. Memorial services will be held at 11 a.m. on Thursday, April 14, 2011 from Gloria Dei Lutheran Church in Redwood Falls with Rev. Joy Ekstedt and Rev. Bill Klavetter officiating. Burial will be held at Redwood Falls Cemetery at a later date. Visitation will be held Thursday, from 10 until 11 a.m., at the church. The family requests that memorials be made to Seasons hospice house in Redwood Falls. Arrangements are with Nelson-Martin Funeral Service of Redwood Falls. E-mail condolences may be sent via www.nelsonmartinfuneralservice.com. Marita Duckstad, the daughter of Reverend Paul and Amanda (Holvick) Reque, was born October 12, 1936 in Graceville, Minnesota. She and her family lived in the Graceville area and then in Orfordville, Wisconsin. Reverend Reque was then called to minister at the English (Gloria Dei) Lutheran Church in Redwood Falls. Marita attended high school here, graduating from Redwood Falls High School in 1954. She furthered her education at Luther College in Decorah, Iowa and in nursing school at Methodist Hospital in Rochester. On August 3, 1957, Marita married Paul Duckstad in Spring Grove, Minnesota. They made their home in Franklin for a year, then moved to Redwood Falls where they have resided since. Marita was a member of Gloria Dei Lutheran Church, study club and a bridge club. She volunteered with several organizations in Redwood Falls. Marita enjoyed time spent with family and friends as well as spending time outdoors and feeding the neighborhood birds. Marita is survived by her husband Paul Duckstad of Redwood Falls; and her children Robert (Tanya) Duckstad of Santee, California, Laura Duckstad of Minneapolis, Susan (Todd) Tholkes of Redwood Falls, and James Duckstad (Brandon Blair) of Santa Monica, California. Also surviving are her grandchildren Kelsey Duckstad, Sarah Duckstad, Rebekkah Duckstad, Morgan Tholkes, Madison Tholkes, and Hunter Tholkes; step-grandchildren Tyann Wilson and Shawn Wilson; step great-granddaughter Riely Wilson; and her sister Thora (Bill) Anderson of Des Moines, Iowa. She was preceded in death by her parents; and her brothers Peter Reque and Dr. David Reque. Blessed be her memory.

The family of Marita Duckstad created this Life Tributes page to make it easy to share your memories.

Send flowers to the Duckstad family.