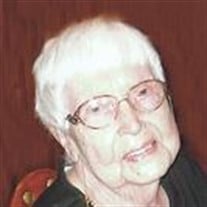 Marion L. Ross, 91, of Redwood Falls, died Saturday, April 16, 2011 at the Redwood Area Hospital. Funeral services will be held at 11 a.m. on Tuesday, April 19, 2011 from Nelson-Martin Funeral Chapel in Redwood Falls with Reverend John E. Robertson officiating. Burial will follow at Morton City Cemetery in Morton. Visitation will be held Tuesday at the funeral home from 10 until 11a.m. Arrangements are with Nelson-Martin Funeral Service of Redwood Falls. E-mail condolences may be sent via www.nelsonmartinfuneralservice.com. Marion Lorraine Ross, the daughter of Otto and Alice (Jones) Bucholz, was born March 19, 1920 in Morton. She grew up in Morton and received her education there. In November of 1937 she married Anthony Schlicht at Morton. They made their home in Morton where their five daughters were born. Marion kept busy raising her family, but also worked as a nurses aide in numerous locations in Minnesota. Sharon, a daughter of Marion, lived with her mother until her death last year. Marion was married to Wilbert Adolphson in 1954 and to this union a son, Scott, was born. After the death of Wilbert, Marion was married to William Ross. In the early 1990s Marion returned to the area and made her home in Redwood Falls. She attended Bishop Whipple Mission St. Cornelia’s Church on the Lower Sioux Community. Marion enjoyed playing bingo and going to Jackpot. She also enjoyed playing cards, especially Rummy. Her other interests were in music and dancing, and going fishing. Her dog, Keno, was very dear to her heart. Marion is survived by her children Scott Adolphson and friend Cheryl, Alicia Christenson, Kay Walberg, and Toni Thedens and husband Tom all of Redwood Falls; and many grandchildren, great grandchildren and nieces and nephews. Also surviving are siblings William “Bill” Bucholz, and Roger Bucholz and his wife Jo all of the state of Virginia, Kenneth Sweesy of Morton, and Vernon Sweesy of Oregon. She was preceded in death by her husband Wilbert Adolphson; daughters Judith Peterson and Sharon Schlicht; grandson Bradley Maurer; and brothers Ray, Robert, Jerry, Jim and Otto. Blessed Be Her Memory

The family of Marion Lorraine Ross created this Life Tributes page to make it easy to share your memories.

Send flowers to the Ross family.