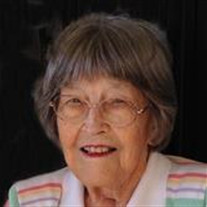 Marilyn Sandmann, 90, of Morgan died Friday, October 10, 2014 at Gil-Mor Manor in Morgan. Funeral services will be held at 10:30 a.m. on Wednesday, October 15, 2014 from St. Matthew’s Lutheran Church in Evan with burial to follow at Dannabod Cemetery, Brookville Township. Visitation will be held on Tuesday, October 14, 2014, from 5 until 8 p.m., at Nelson-Martin Funeral Home in Morgan and will continue at the church on Wednesday for one hour prior to services. Arrangements are with Nelson-Martin Funeral Service of Morgan. E-mail condolences may be sent via www.nelsonmartinfuneralservice.com. Marilyn E. Sandmann, the daughter of Arthur and Pearl (Frederiksen) Johnson, was born April 20, 1924 in Sleepy Eye. When she was a young child, her family moved to Evan where Marilyn grew up and received her early education in country school. She attended school in Springfield during her “middle school” years and graduated from Morgan High School in 1942. On July 16, 1942, Marilyn married Ellsworth Sandmann and they made their home on his family farm south of Morgan. They moved into Morgan in 1967. Marilyn was a homemaker and began her employment at Gil-Mor Manor when it opened in 1961 and worked there for 44-1/2 years. Marilyn was a lifelong member of St. Matthew’s Lutheran Church in Evan and was active in the Ladies’ Aid. She loved being involved in the Brookville 49ers Extension Club. When her older children were in 4-H, Marilyn was an adult leader. She enjoyed sewing and, later, quilting. Marilyn made the most beautiful wedding cakes – including the decorative bells made of sugar and egg white. She enjoyed gardening and took pride in keeping her home and yard neat and tidy. Marilyn is survived by her children Nancy (Lowell) Blick of Morgan, Sheldon (Ursula) Sandmann of Inver Grove Heights, and Wendy Hoffbeck-Hocking of Sugar Grove, Illinois; 10 grandchildren; 16 great-grandchildren; and her sister Joan Bloemke of Waseca. She was preceded in death by her husband Ellsworth on August 29, 2002; daughter Suzanne; sons-in-law Larry Hoffbeck and Bob Hocking; and grandchildren Gary and Charles Blick and two in infancy. Blessed be her memory.

The family of Marilyn E. Sandmann created this Life Tributes page to make it easy to share your memories.

Send flowers to the Sandmann family.