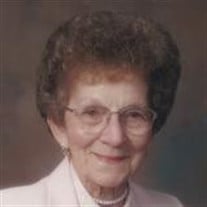 Marie Allex, 91, of Redwood Falls and formerly of Vesta died Tuesday, May 3, 2011 at Wood Dale Nursing Home. Mass of Christian Burial will be held at 10:30 a.m. on Friday, May 6, 2011 from St. Catherine’s Catholic Church in Redwood Falls with Father Michael M. Doyle officiating. Burial will follow in the Holy Name Catholic Cemetery, Vesta. Visitation will be held Thursday, May 5, 2011, from 4 until 7 p.m., with a prayer service at 7 p.m., all at St. Catherine’s Catholic Church. Visitation will continue at the church on Friday for one hour prior to services. Arrangements are with Nelson-Martin Funeral Service of Redwood Falls. E-mail condolences may be sent via www.nelsonmartinfuneralservice.com. Marie Magdeline Allex, the daughter of Wenzel George and Margaret (Rothmeyer) Johanneck, was born January 17, 1920 in Vail Township, Redwood County. She grew up on the farm in Vail Township and received her education in the nearby country school. Marie later worked as a hired girl for the Elmer Franta family in Wabasso and made her home with them during that time. On May 6, 1941, Marie married Roman Allex at St. Anne’s Catholic Church in Wabasso and the couple lived and farmed west of Vesta. In 1972, Marie and Roman purchased and moved into a home in Vesta. Roman died in 1985; Marie continued to live in Vesta until moving into an apartment in Redwood Falls in 2002. She was a homemaker for much of her life, later working at the golf club and Valley Supper Club until her retirement in 1986. Marie was a member of Holy Name Catholic Church in Vesta and the Christian Mothers’ Society. She also belonged to the church choir and folded the bulletins for church services. Marie volunteered at the Vesta Museum and for the food shelf. She and Roman belonged to a square dance club and enjoyed dancing together to old-time music. Marie loved to cook, bake, and crochet. She had an extensive flower garden and was famous for her old-fashioned sauerkraut and dumpling dinners. Marie is survived by her children Dennis (Carol) Allex of Alexandria, Carole (David) Snyder of Milroy, Gary (Cathy) Allex of Redwood Falls, Steve (Kathy) Allex of Shoreview, Michael (Johanna) Allex of Veronoa, Wisconsin, and James (Laurie) Allex of St. Cloud. Also surviving are her grandchildren Brad (Betsy) Snyder, Brenda (Michael) Coquyt, and Ben Snyder; Michelle (Scott) Wiethoff, Kevin (Angela) Allex, and Patrick Allex; Brian (Lori) Allex, David (Jodi) Allex, Jerry (Dominique) Allex, and Jesse Allex; Corey (Carla) Allex, Jon Allex, and Trisha Allex; Peter Allex, Matthew (Rachael) Allex, Rachel Allex, and Paul Allex; and Emily Allex, Ryan Allex, and Reed Allex. Further surviving are her 24 great-grandchildren; three great-great-grandchildren; sisters Mildred Bellig of Lamberton, Margaret Tampa of Burbank, California, and Gloria (Fred) Ensign of Mankato; and her sister-in-law Florence Johanneck of Redwood Falls. She was preceded in death by her husband Roman in 1985; great-grandchild Jacob Allex; brother Jerome Johanneck; and sisters Francis Gadow and Doris Kiley. Blessed be her memory.

The family of Marie Magdeline Allex created this Life Tributes page to make it easy to share your memories.

Marie Allex, 91, of Redwood Falls and formerly of Vesta died...

Send flowers to the Allex family.