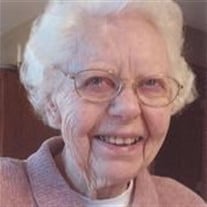 Marian Gluth, 94, of Morgan died Wednesday, August 31, 2016 at Rice Memorial Hospital in Willmar. Funeral services will be held at 1:30 p.m. on Tuesday, September 6, 2016 from Zion Evangelical Lutheran Church in Morgan with burial to follow in the Morgan City Cemetery. Visitation will be held Tuesday, from 12:30 until 1:30 p.m., at the church. Arrangements are with Nelson-Hillestad Funeral and Cremation Service of Morgan. E-mail condolences may be sent via www.nelson-hillestad.com. Marian Petrea Gluth, the daughter of Christ and Johanna Kjeldgaard, was born July 7, 1922 in rural Morgan. She was raised on the home farm with her six siblings and received her education in rural school District 53. On March 2, 1943, Marian married Delbert M. Gluth in Evan, just a couple miles from her home. At that time they moved to Mora where they farmed for two years. In 1944, Marian and Delbert moved back to a farm south of Morgan where they lived for six years. They then built their own house in Morgan and moved there in 1949. During this time, Marian was a homemaker and worked part-time for a few years as a cook in the Morgan school. Marian loved to sew and quilt. She made most of the clothes for her daughters, Jane and Carol, as they were growing up as well as making hundreds of quilts over the years. Marian always made sure anything she made was done as perfectly as possible! She had a green thumb and loved working with the soil – raising lots of vegetables and flowers in her gardens. Marian preserved fruits and vegetables in the late summer and fall each year, filling the shelves with hundreds of jars tomatoes, pickles, sauces and jams. Marian was a great cook and baker. She was always so willing to help relatives and friends. In the fall of 2000 Marian and Delbert moved to the Glen Oaks Apartments in New London to be closer to their children. Delbert passed away in 2002 and, in January 2013, Marian moved into the Glen Oaks Assisted Living Suites, where she lived until her death. She is survived by her daughters Jane (Wayne) Friedrich of Spicer, and Carol (Charlie) Cunningham of Atwater; grandchildren Jennifer (Mike) Asher of Milaca, and Rachel (Tony) Ree of Richmond; and her precious great-grandchildren Ethan, Zach, and Tyson Asher, and Haley and Dylan Ree. Also surviving are her youngest brother, Gordon Kjeldgaard of Petoskey, Michigan; and several nieces and nephews. Marian was preceded in death by her husband Delbert; her parents; and siblings Einar (who was killed in World War II), Henry, Ellen, Lillian, and Elsie. Blessed be her memory.

The family of Marian Gluth created this Life Tributes page to make it easy to share your memories.

Send flowers to the Gluth family.