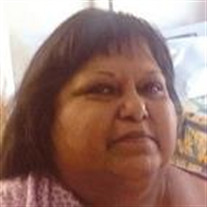 Maria Vigil, 67, of Sleepy Eye and formerly of Clements died Tuesday, February 7, 2017 at Sleepy Eye Care Center. Funeral services will be held at 11 a.m. on Monday, February 13, 2017 from Nelson-Hillestad Funeral Home in Redwood Falls with burial to follow in St. Joseph’s Cemetery, Clements. Visitation will be held on Monday, from 10 until 11 a.m., at the funeral home. Arrangements are with Nelson-Hillestad Funeral and Cremation Service of Redwood Falls. E-mail condolences may be sent via www.nelson-hillestad.com. Maria Vigil, the daughter of Cruz and Marcela (Garcia) Martinez, was born January 1, 1950 in Edingburg, Texas. On March 28, 1967, Maria married Tirso Vigil in Pharr, Texas. Following their marriage they lived in Chicago Heights, Illinois and in Indiana before moving to Minnesota in 1997. Maria was a very hard working mother of five. She always put others ahead of herself. Maria loved spending time with her family and grandkids and always kept in touch with her family in Texas. She enjoyed sewing, cooking and knitting. Maria was a very strong person with a very big heart. She is survived by her daughters Velma (Paul) Haugan, Idalia Vigil, and Jessica (Eric) Vigil; and son Rene Vigil, all of Fairfax; six grandchildren; seven great-grandchildren; and siblings Alicia Rodriguez, Amelia (Rudy) Reyna, and Meme (Olivia) Martinez, all of San Juan, Texas, Consuelo (Louterio) Ozona of Ennis, Texas, and Juan (Maria) Martinez of Elsa, Texas. Maria was preceded in death by her husband Tirso in October 2013, one son, three brothers, and one sister. Blessed be her memory.

The family of Maria Vigil created this Life Tributes page to make it easy to share your memories.

Maria Vigil, 67, of Sleepy Eye and formerly of Clements died...

Send flowers to the Vigil family.