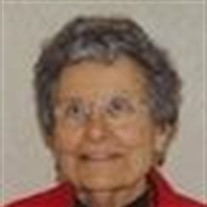 Marguerite Meyers, 95, of Morgan died Sunday, January 31, 2016 at Gil-Mor Manor in Morgan. Mass of Christian Burial will be held at 10:30 a.m. on Friday, February 5, 2016 from St. Michael’s Catholic Church in Morgan. Burial, with military honors, will follow at the church cemetery. Visitation will be held on Thursday, February 4, 2016, from 4 until 7 p.m., with a prayer service at 6 p.m., at Nelson-Hillestad Funeral Home in Morgan, Visitation will continue on Friday, from 9:30 until 10:30 a.m. at the church. The family requests memorials be directed to the Wounded Warrior Fund. Arrangements are with Nelson-Hillestad Funeral and Cremation Service of Morgan. E-mail condolences may be sent via www.nelson-hillestad.com. Marguerite Emm Meyers, the daughter of Clyde and Anna (Haubrich) Crain, was born October 26, 1920 in Redwood Falls. She spent her youngest years in Redwood Falls and Morton. Marguerite graduated from Morgan High School in 1938, then attended the St. Joseph’s Nursing School. Marguerite enlisted in the United States Army Nurse Corps and served from 1943 until 1946. She was stationed in England and France during World War II with the 217th Hospital Unit. Following her honorable discharge as a First Lieutenant, she completed her Bachelor of Science degree at the University of Minnesota and then returned to the Morgan area. On December 2, 1950, Marguerite married Wayne Meyers at Holy Trinity Catholic Church in New Ulm. The couple made their home on a farm near Morgan where they raised their family. Wayne passed away in 1972 and Marguerite remained on the farm until moving into Morgan in 1978. Marguerite was a farmwife and was also employed as a paraprofessional at St. Michael’s School, and taught English as a second language. She served on the Redwood County Public Health Task Force and volunteered with Meals on Wheels and the Redwood County Food Shelf. Marguerite was a member of St. Michael’s Catholic Church and the Council of Catholic Women. She also taught CCD/Religious Education and served on St. Michael’s School Board. Marguerite is survived by her children Kevin (Elaine) Meyers of Draper, South Dakota, Kent (Zindie) Meyers of Spearfish, South Dakota, Joel (Kim) Meyers of Rochester, Colin (Maureen) Meyers of Kansas City, Missouri, Ann (Tom) Riebel of Evergreen, Colorado, Cyndee (Jerry) Ebnet of Kasson, Marie Meyers (special friend Randy Smetak) of Redwood Falls, and Paul Meyers (special friend Valerie Windsor) of Cathlamet, Washington. Also surviving are 18 grandchildren; eight great-grandchildren; her sister Phyllis Lueken of Morgan; son-in-law Dennis Garrett of Milwaukee, Wisconsin; and sister-in-law Cathy Crain of Redwood Falls. She was preceded in death by her husband Wayne, daughter Renee Meyers, and brother Jack Crain. Blessed be her memory.

The family of Marguerite Emm Meyers created this Life Tributes page to make it easy to share your memories.

Send flowers to the Meyers family.