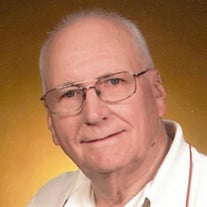 Lyle Borth, 91, of Redwood Falls died Thursday, August 23, 2018 at the MN Veterans Home in Luverne, Minnesota. Funeral services will be held at 10:30 a.m. on Friday, August 31, 2018 from the Gloria Dei Lutheran Church in Redwood Falls. Burial, with full Military Honors, will follow at Crestlawn cemetery. Visitation will be held Thursday, August 30, from 4 – 7 p.m. at the Nelson-Hillestad Funeral Home in Redwood Falls. Visitation will continue Friday at the church, from 9:30 – 10:30 a.m. Arrangements are with Nelson-Hillestad Funeral and Cremation Service of Redwood Falls. E-mail condolences may be sent via www.nelson-hillestad.com Lyle Gustaf Borth was born November 19, 1926 in Fairfax, Minnesota to Ernest and Alvina (Rehmann) Borth. He entered the United States Navy in Great Lakes, Illinois in 1945. He served during WW II and was later discharged from headquarters in 9 ND Great Lakes, Illinois. After serving in the United States Navy he received his GED and also attended Dunwoody Institute in Minneapolis, MN for his Electrician Certification. In 1950 he was united in marriage to Elsie Helen Reynolds. They were members of Gloria Dei Lutheran Church. Lyle was a member of the VFW and American Legion in Redwood Falls. He also enjoyed camping, fishing, dancing and playing cards with his friends and family. Lyle especially enjoyed spending time with his grandchildren and great-grandchildren. He is survived by his children, Rodney Borth of Redwood Falls, Karen (James) Goblirsch of Wabasso, Mark (Pam) Borth of Genesee, Idaho; a daughter-in-law Barb Borth (Dennis); sister, Loaine Williams (Ray) of Prescott Valley, Arizona; 11 grandchildren; and 8 great grandchildren. He was preceded in death by his parents; wife, Elsie Borth; a son, Dennis Borth; brothers, Marvin, Murel and Myron; and a sister Orpha Kuester. Blessed be his memory.

The family of Lyle Borth created this Life Tributes page to make it easy to share your memories.

Send flowers to the Borth family.