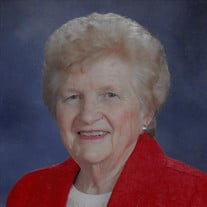 Lucille M. Nelson, age 86, of Redwood Falls, Minnesota, passed away unexpectedly at her home on Friday, January 31, 2020. Funeral services will be held at 2 pm on Thursday, February 6, 2020, at the First United Methodist Church in Redwood Falls. Visitation will be held from 4 until 8 pm on Wednesday, February 5, at the Nelson-Hillestad Funeral Home in Redwood Falls. Visitation will continue on Thursday, from 1 until 2 pm at the church. Burial will follow in the Redwood Falls Cemetery. Arrangements are with Nelson-Hillestad Funeral and Cremation Services of Redwood Falls. E-mail condolences may be sent via www.nelson-hillestad.com. Lucille Mary Watkins, daughter of Rollie and Carrie (Willcox) Watkins was born on August 15, 1933 at her parents’ farm home, the midwife nurse was Doris (Watkins) Sandeen and the sister of Carrie. Lucille was baptized at the First United Methodist Church of Redwood Falls in 1933 and was confirmed in 1947. She started first grade in Morton, Minnesota, and the first part of March transferred to Redwood Falls School. She graduated in the top 10% of her class on June 1, 1951. She was very active in school activities including bus patrol, choir, declamation, library assistant, class plays and member of many class committees. Outside school activities included roller skating, church and 4-H. On June 22, 1951 she married Orville J. Nelson at the First United Methodist Church in Redwood Falls. They farmed at Morris, Minnesota, Vesta, Minnesota, Olivia, Minnesota, and Norma, North Dakota. When they had six children they moved to Seattle, Washington, where she was employed by Boeing for six years, as a secretary and Orville was a welder. In 1963, and now with seven children, they returned to Minnesota to her parents farm where they raised their children, attended a lot of school activities, became a 4-H leader, honorary Future Farmers of America, participated in Church Circle activities, leader of Christian Women Club and worked for Zytec/Artysen for 20 years. With her husband, Orville, and family they started a scrap metal business in 1967, known as ‘Farmer’s Salvage’ and later added ‘Nelson Towing’. Lucille would drive large trucks and became one of the first women truck drivers seen on the road. She was known for always wearing red lipstick. In 1997, Orville passed away and Lucille and Charles ran the business. In 2010, Lucille moved into Redwood Falls and in 2013, Charles purchased the business, now known as Nelson’s Salvage and Towing. Lucille was always willing to try the new inventions that came along, like calculators, VHS-Beta, computers, and cell phones. She was never afraid to try new things. She always wanted to get a college degree but was unable to accomplish this in prior years due to raising a large family. She started taking night classes at Southwest State University and graduated with a 4-year Business degree on May 28, 1994. She traveled all 50 states, the Carribbean and at least 6 foreign countries with various family members. She took thousands of pictures and had more memories than the average person could ever want. Lucille had many interests, she attended and led Bible Studies at church. She enjoyed ceramics, sewing, crocheting but gardening was her passion where she would spend countless hours. Those that could see her gardens from the walking path were amazed at its beauty. Lucille passed away unexpectedly at her home on Friday, January 31, 2020, at the age of 86. Lucille is survived by her 7 children and families: Eugene (Beverly) Nelson of Sanborn, Donald (Barbara) Nelson of Redwood Falls, Diana (Charles) Glaser of Bloomington, Paula (Bruce) Andrews of Lakeville, Charles Nelson of Redwood Falls, Vicki (Tim) Luhm of Duluth and Steven Nelson of Redwood Falls. There are 26 grandchildren and 36 great-grandchildren. Also, sister-in-law Carol Watkins of Montgomery, Alabama, brother-in-law Norlen (Joanne) Nelson of Minot, North Dakota, sister-in-laws Ruth Nelson and Rosemary Nelson both of Seattle, Washington. She was preceded in death by her parents, Rollie and Carrie and husband, Orville; sisters, Ardith Jean Watkins, Harriet (Russell) Jensen, Dorothy (Wayne Sr.) Ruoho; brothers, Donald (Karen) Watkins, and John Watkins; two grandsons, Nicholas Nelson and Steve Glaser; one great-grandchild, Braydon Yos. It was a great and fulfilling life with the help of the Lord!!! Blessed be her memory.

Lucille M. Nelson, age 86, of Redwood Falls, Minnesota, passed away unexpectedly at her home on Friday, January 31, 2020. Funeral services will be held at 2 pm on Thursday, February 6, 2020, at the First United Methodist Church in Redwood Falls.... View Obituary & Service Information

The family of Lucille M Nelson created this Life Tributes page to make it easy to share your memories.