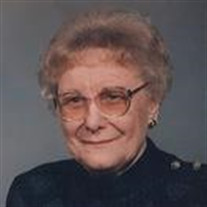 Lorraine M. Christensen, 86, of Redwood Falls died Monday, April 9, 2012 at the Redwood Area Hospital. Mass of Christian Burial will be held at 1 p.m. on Saturday, April 14, 2012 from Our Lady of Victory Catholic Church in Lucan with burial to follow in the church cemetery. Visitation will be held Saturday, at the church, from noon until 1 p.m. Arrangements are with Nelson-Martin Funeral Service of Redwood Falls. E-mail condolences may be sent via www.nelsonmartinfuneralservice.com. Lorraine Marie Christensen, the daughter of Arthur and Pauline (Kotval) Christensen, was born June 4, 1925 in Granite Rock Township, Redwood County. She grew up on the family farm and began her formal education at Lucan Public School where she graduated from eighth grade. Lorraine helped out at home and then, in her late teens, moved to Minneapolis where she worked for Sears Roebuck in the Lake Street center. At the same time, Lorraine continued her education at West High School in Minneapolis and earned her high school diploma. She retired from Sears in 1987 and relocated to Redwood Falls in 2002. Lorraine became a resident at Wood Dale Home in 2009. She was a life-time member of Church of the Holy Name in Minneapolis and was an active member of the CCW as well as volunteering with the church’s social activities and fund-raisers. Lorraine enjoyed all sports. She bowled with a league for many years. Lorraine loved to attend the Twins games and held season tickets. She enjoyed spending time with her family, especially her nieces and nephews. Lorraine is survived by her siblings Althea Miller of Sauk Rapids, Lawrence Christensen of Hoffman, Mary Iovino of Hiawassee, Georgia, Donald (ValJean) Christensen of Rush City, Gilbert Christensen of Lucan, Jean Turgeon of South St. Paul, Arthur (Marcia) Christensen of Somerset, Wisconsin, Albert (Ellen) Christensen of Lucan, and Cathy (Gary) Allex of Redwood Falls. She was preceded in death by her parents, and her brother James. Blessed be her memory.

Lorraine M. Christensen, 86, of Redwood Falls died Monday, April 9, 2012 at the Redwood Area Hospital. Mass of Christian Burial will be held at 1 p.m. on Saturday, April 14, 2012 from Our Lady of Victory Catholic Church in Lucan with burial... View Obituary & Service Information

The family of Lorraine Marie Christensen created this Life Tributes page to make it easy to share your memories.