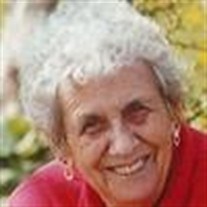 Lorna Thorston, 98, of Springfield died Tuesday, October 18, 2016 at St. John’s Lutheran Home in Springfield. Funeral services will be held at 10:30 a.m. on Saturday, October 22, 2016 from Sundown Lutheran Church, rural Springfield, with burial at a later date in the church cemetery. Visitation will be held Friday, October 21, 2016, from 5 until 7 p.m. and will continue on Saturday, from 9:30 until 10:30 a.m., all at the church. Arrangements are with Nelson-Hillestad Funeral and Cremation Service of Redwood Falls. E-mail condolences may be sent via www.nelson-hillestad.com. Lorna Ida Wilhelmina Thorston, the daughter of Alfred and Emma (Raddatz) Klause, was born January 28, 1918 in Yellow Medicine County. She grew up in the Redwood Falls area and received her formal education in country school. On May 31, 1940, Lorna married Clarence Thorston in the Willow Lake Township parsonage. The couple settled on the Thorston family farm in Sundown Township, Redwood County where they lived and farmed their entire married life. Clarence passed away on November 1, 1992 and Lorna continued to live on the farm until moving into Springfield at the age of 95. Lorna was a homemaker. She enjoyed flower gardening and had a large vegetable garden. Lorna was a crafter and sold her creations at many craft fairs. She was a wonderful baker and specialized in cookies of every kind. Lorna was known as the “cookie angel of Springfield.” She belonged to Sundown Lutheran Church where she taught Sunday school and was active in WELCA. Lorna was an adult leader for the Mighty Mites 4-H Club and belonged to the Mother’s Club. She is survived by her sons Clarence (Marian) Thorston, and Gene (Bev) Thorston all of Springfield; and daughters Marlene (Ken) Meyers of New Richland, and Jacalyn Falter of Naples, Florida. Also surviving are 18 grandchildren; 26 great-grandchildren; five great great-grandchildren; and her sister Elaine (Arnold) Krohn of Nicollet. Lorna was preceded in death by her husband Clarence, three sons (including twins in infancy), a daughter, a son-in-law, a step-grandson, two sisters, and three brothers. Blessed be her memory.

The family of Lorna Thorston created this Life Tributes page to make it easy to share your memories.

Send flowers to the Thorston family.