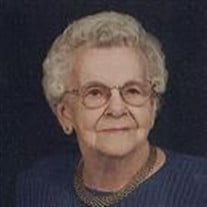 Lorna Kleinschmidt, 99, of Morgan died Monday, March 19, 2012 at Gil-Mor Manor in Morgan. Funeral services will be held at 10:30 a.m. on Friday, March 23, 2012 from Zion Evangelical Lutheran Church in Morgan with burial in Zion Evangelical Lutheran Cemetery, Eden Township. Visitation will be held on Thursday, March 22, 2012, from 5 until 7 p.m., at Nelson-Martin Funeral Home in Morgan and will continue at the church on Friday for one hour prior to services. Arrangements are with Nelson-Martin Funeral Service of Morgan. E-mail condolences may be sent via www.nelsonmartinfuneralservice.com. Lorna Hulda Kleinschmidt, the daughter of Herman W. and Mathilda E. (Otto) Steinhaus, was born December 24, 1912 in Three Lakes Township, Redwood County. She grew up on the farm in Three Lakes Township and received her education at Sunrise District 106 country school. On September 2, 1934, Lorna married Louis A. Kleinschmidt at the Willow Lake Township church parsonage. The couple moved into their home in Morgan where they lived their entire married life. Louis died in February 1976 and Lorna continued to live in their home until moving to Gil-Mor Manor on February 19, 2008. She was a homemaker and also worked for seven years as the evening cook at Gil-Mor Manor. Lorna was a member of Zion Evangelical Lutheran Church where she served as the church organist and as a Sunday school teacher. She belonged to the Zion Ladies’ Aid and served as its president, secretary and treasurer. Lorna was also active in the Morgan community. She belonged to the VFW Auxiliary and served as its president, secretary and treasurer as well as serving as part of the Auxiliary Color/Honor Guard. Lorna was a member of the Morgan Senior Citizens. She did many years of volunteer work in the community, including serving as the local chairman for the American Red Cross bloodmobile, and placing flags at the cemeteries for Memorial Day. In her spare time, Lorna enjoyed crocheting. She loved spending time with her family. Lorna is survived by her sons John (Linda) Kleinschmidt of Morgan, and Dean (Marlene) Kleinschmidt of Allan Park, Michigan; eight grandchildren; and nine great-grandchildren. She was preceded in death by her husband Louis on February 4, 1976; her twin brother Lester; and her sister Velma. Blessed be her memory.

The family of Lorna Hulda Kleinschmidt created this Life Tributes page to make it easy to share your memories.

Send flowers to the Kleinschmidt family.