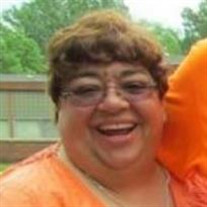 Lori A. Trebesch, age 55, of Morgan died Wednesday, September 19, 2017 at the New Ulm Medical Center in New Ulm. Mass of Christian Burial will be held at 11 a.m. on Friday, September 22, 2017 from St. Michael’s Catholic Church in Morgan with burial to follow in the St. Michael’s Catholic Cemetery. Visitation will be held at the funeral home in Morgan on Thursday, September 21, 2017 from 4 – 8 p.m. and will continue on Friday from 10 a.m. until 11 a.m. at the church. Arrangements are with Nelson-Hillestad Funeral and Cremation Service of Morgan. E-mail condolences may be sent via www.nelson-hillestad.com. Lori Ann Trebesch, the daughter of Donald and Mary (Mickelson) Hacker was born on September 28, 1961 in St. Paul, Minnesota. She grew up near Sleepy Eye attending grade school in Evan and later graduating from St. Mary’s Catholic High School in 1980. She was baptized on December 17, 1961 at St. Mary’s Catholic Church in Sleepy Eye. Lori married Lynn Trebesch on June 13, 1992 at St. Michael’s Catholic Church in Morgan. She was a member of St. Michael’s Catholic Church and continued to be active as a Eucharistic Minister and would volunteer to help out at many church functions and always willing to lend a hand with a smile on her face. She had a love for cooking and trying new recipes, always adding her special touch on each of the dishes. Lori is survived by her husband, Lynn Trebesch of rural Morgan; one son, Jeffery Trebesch of Sartell and one daughter, Whitney Trebesch of rural Morgan; Parents Donald and Mary Hacker of Sleepy Eye; a brother, Kevin and (Julie) Hacker of Baxter, MN; sister-in-law, Candy Hacker of Brainerd, MN; nephew Lucas (Kaitlyn); niece, Kendra; Father-in-law, John Trebesch of Morgan; sister and brother-in-laws, Peggy Barron, Dale (Patty) Trebesch, Steve (Lora) Trebesch, Donna Trebesch, Becky (Gene) Wolling, Scott (Melissa) Trebesch; and many nieces and nephews. She was preceded in death by two brothers, Jeff and Dean; and her mother-in-law, Lucille Trebesch. In loving memory.

The family of Lori Trebesch created this Life Tributes page to make it easy to share your memories.

Send flowers to the Trebesch family.