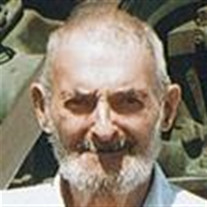 Lloyd “Slivers” Blomeke, 80, of Morgan died Saturday, October 6, 2012 at Gil-Mor Manor in Morgan. Memorial Services will be held at 11 a.m. on Friday, October 12, 2012 from St. John Lutheran Church in Morgan. Burial with military honors will be held at 2 p.m. on Friday, October 12, 2012 at the St. John Lutheran Cemetery in Morgan. Visitation will be held on Friday, October 12, 2012 from 9 until 11 a.m., the church. Arrangements are with the Nelson-Martin Funeral Service of Morgan. E-mail condolences may be sent via www.nelsonmartinfuneralservice.com. Lloyd Leroy Blomeke, the son of Bernard and Esther (Drusch) Blomeke, was born November 12, 1931 in Morgan. Slivers grew up in Morgan and received his formal education there, graduating with the Morgan High School Class of 1949. He was inducted into the United States Army in 1953 and served during the Korean Conflict. Slivers was honorably discharged in 1955 and returned to Morgan. He spent his entire working life with heavy equipment, including the family business – Blomeke Brothers – a company specializing in heavy construction. Slivers enjoyed being a hobby farmer as well. Slivers was a member of the August Donner American Legion Post 309 in Belview. He enjoyed taking fishing trips, collecting antique machinery, listening to old-time music, attending races, bowling and spending time with friends and family. Slivers is survived by his brother Glenn (Jeanie) of Morgan; nieces and nephews Brad (Suzy) Blomeke of Morgan, Barb (Brian) Lauterbach of Charles City, Iowa, Bruce Blomeke of Morgan, Mary Beth (Jeff) Carlson of Minneapolis, and Brenda (Paul) Zeug of Morgan; and numerous grand- and great-grand-nieces and nephews. He was preceded in death by his parents. Blessed be his memory.

The family of Lloyd "Slivers" Leroy Blomeke created this Life Tributes page to make it easy to share your memories.

Send flowers to the Blomeke family.