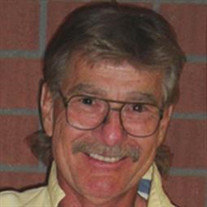 Frank Pratt, 65, of Redwood Falls died, following a brief struggle with pancreatic cancer, on Sunday, January 30, 2011 at Seasons in Redwood Falls. Funeral services will be held at 10:30 a.m. on Friday, February 4, 2011 from First United Methodist Church in Redwood Falls with Rev. Janiece Redman officiating. Burial will follow at Crestlawn Gardens, rural Redwood Falls. Visitation will be held on Thursday, February 3, 2011, from 4 until 8 p.m., at the Nelson-Martin Funeral Home in Redwood Falls and will continue on Friday at the church for one hour prior to services. Arrangements are with the Nelson-Martin Funeral Service of Redwood Falls. E-mail condolences may be sent via www.nelsonmartinfuneralservice.com. Lewis Franklin “Frank” Pratt, Jr., the son of Lewis and Hazel (Bliss) Pratt, was born February 17, 1945 in Redwood Falls. Frank attended country school through the sixth grade, and graduated from Redwood Falls High School in 1963. In 1964, he married Toni Kay Otto of Redwood Falls; the marriage ended in 1983. In 2000, Frank found love and began to build a life with Debra Jean Tholkes of Redwood Falls. They were engaged to be married. Frank called many places home, including Minneapolis, Olivia, Belview, and most recently, Redwood Falls. He was employed by Step Saver, Inc. in Redwood Falls. Frank’s love of horses was well known. He had a special touch with them and easily earned their trust. Frank enjoyed antiquing with Deb and going to horse auctions. The grandkids knew that he could fix just about anything with a little ingenuity and the right tools. Frank loved his cars, trucks, and motorcycle and was always on the lookout for something better and shinier. As much as Frank liked to keep his hands and mind occupied he also enjoyed sitting around the table for an after-dinner chat about the good old days. He always took time to share his experience and life lessons with his grandkids. He is remembered with love by his fiancée, Deb Tholkes of Redwood Falls; and by his daughters Leah (Paul) Seehusen of Corpus Christi, Texas, and Megan Pratt (special friend Dan Wellnitz) of Redwood Falls; grandchildren Kerry Breyette, Tessa Brown, Wyatt Smith, Noah and Lora Seehusen; and his sister Morene (Steven) Rohlik of Owatonna. He is also survived by Deb’s children Kelly (Joe) Merrill, Stacey (Jeremy) Frank, Derek (Dana) Woodford, and Amy (Jeremy) Hillenbrand; Deb’s grandchildren Brittany, David and Tyler, Ashley, Alexis and Austin, Christopher, Cole, and Carson, and Bronson, Maddy, and Isabelle; and Deb’s great-granddaughter Olivia. Further surviving are his nieces Rochelle (Thomas) Wehmhoff, Marisa (Mark) Melander, and Nancy (Darrick) Hamak. He will be missed by aunts, uncles, cousins, his great-niece and nephews, and the many people he called friend. Waiting for Frank in heaven are his parents Lewie and Hazel, and his son Shawn Mikel Pratt. Blessed be his memory.

The family of Lewis "Frank" Franklin Pratt Jr. created this Life Tributes page to make it easy to share your memories.

Send flowers to the Pratt family.