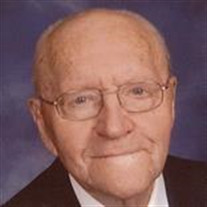 Lester “Les” Therkilsen, 88, of Springfield died Sunday, June 4, 2017 at his home. Memorial services will be held at 11 a.m. on Saturday, June 10, 2017 from the United Methodist Church in Springfield. Burial will be held at a later date in the Congregational Cemetery, Comfrey. Visitation will be held Friday, June 9, 2017, from 4 until 7 p.m., and will continue on Saturday, from 10 until 11 a.m., all at the United Methodist Church in Springfield. Arrangements are with Nelson-Hillestad Funeral and Cremation Service of Redwood Falls. E-mail condolences may be sent via www.nelson-hillestad.com. Lester Orville Therkilsen, the son of Marinus and Agnes (Anderson) Therkilsen, was born January 5, 1929. The country school he attended through the eighth grade was located immediately to the east of their homeplace and was an easy walk, even in the winter. Les was responsible for carrying a pail of fresh water from the farm back to the schoolhouse each day after he had been home for noon lunch. The school kids gathered at the Therkilsen home when it was time for immunizations in case anyone passed out! His 9th and 10th grade years were spent at the Comfrey Public School. Since he was needed on the farm, and that is where he most wanted to be – working alongside his dad, Les hung up his schoolbag and dug in. On November 27, 1951, Les married Dee Schottle at the Congregational Church in Comfrey. They lived on the homeplace and raised their four children there. Les and Dee loved to fish, play cards, bowl, play horseshoes, dance and travel; over their 58 years together they got to do all those things in abundance, with many treasured family and friends. Following their retirement and moves to Windom in 1997, and then to Springfield in 2007, many new friends were made and new memories created. Les passed away at his home on Sunday, June 4, with the sun on his face and surrounded by love. He is survived by his children Kevin (Beth) of Glenwood, Jodie (Doug) Callanan of Comfrey, and Jeff (Darlene) of Placerville, California; daughter-in-law Jerri (Mike) of International Falls; grandchildren Justin, Melissa (Shiran), Eric (Charity), Tara (Tim), Brian (D’Lisha), Suzette, and Kolt (Heidi); great-grandchildren Caiden, Tyler, Kylie, and Wilder; his brother Roy; and many well-loved nieces and nephews. Les was preceded in death by his wife Dee on November 15, 2010; his son Kurt on November 19, 2000; his parents; sisters Gladys, Elsie, Grace, and Lotus; and mother- and father-in-law Frank and Vera Schottle. Blessed be the memory of this good and kind man.

The family of Lester "Les" Therkilsen created this Life Tributes page to make it easy to share your memories.

Send flowers to the Therkilsen family.