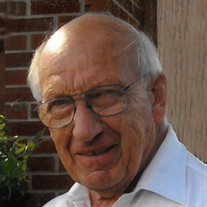 Leonard P. Welter, age 88, of Willmar and formerly of Morgan, died Sunday, August 9, 2020 at Copperleaf Senior Living in Willmar, Minnesota. Mass of Christian Burial will be held at 11 a.m. Wednesday, August 12, 2020 at St. Michael’s Catholic Church in Morgan. Burial will follow in St. Michael’s Catholic Cemetery, Morgan, Minnesota with full Military Honors. Visitation will be held Wednesday, August 12, 2020, from 10 until 11 a.m. at the church. Leonard Philip Welter was born to John and Christine (Koll) Welter in Morgan on January 24, 1932. Leonard attended school in Morgan. In 1952 he enlisted in the Army and served as Chaplin’s Assistant. While in the service he married Mary Ann Gewerth on January 28, 1953. In 1954, Leonard was honorably discharged. They moved to Morgan, then to Brooklyn Center, then back to Morgan. Together they raised 6 children. Leonard owned Welter’s Wood Works where he built cabinets all of his life. He also enjoyed wood working crafts. Leonard was a member of St. Michael’s Catholic Church. A few years after Mary Ann’s death, Leonard married Carol Anderson on May 30, 1998. Together they resided in New Ulm. After Carol’s passing, he moved to Evan. In 2011 Leonard moved to Copperleaf Senior Living in Willmar. Leonard had a deep love for music and was known for his harmonica playing. He loved his family and spending time with them. He had a special relationship with all of his grandchildren and great grandchildren. He loved to share his silliness and sense of humor with all those he met. Leonard is survived by his children-Jeff (Amy) Welter of Blomkest, Mn, Dave (Shelly) Welter of Milbank, SD, Carol (Bob) Fader of Willmar, Mn, Larry (Kari) Welter of Mankato, Mn, and Julie (Jerry) Swoboda of Willmar, Mn. He is also survived by his step-children-Terry (Susie) Anderson of New Ulm, Mn, Terri Anderson of New Ulm, Mn, Lori (Mark) Hofmeister, New Ulm, Mn, Jane (Lee) Sturm, New Ulm, Mn, and Peggy Anderson of Owatonna, Mn. Leonard is survived by his 18 grandchildren, 11 step-grandchildren, 13 great-grandchildren and 17 step-grandchildren. Leonard is preceded in death by his parents, John and Christine Welter, his 1st wife, Mary Ann and 2nd wife, Carol, son, Bruce Welter and step-son Daniel Anderson, along with 5 brothers and 4 sisters. Blessed be his memory.

The family of Leonard P Welter created this Life Tributes page to make it easy to share your memories.

Leonard P. Welter, age 88, of Willmar and formerly of Morgan,...

Send flowers to the Welter family.