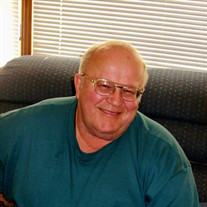 Lauren D. Krause, 75, of Redwood Falls died Friday, November 5, 2021 at his home. Funeral services will be held at 10:30 a.m. on Thursday, November 11, 2021 at the Evangelical Free Church in Redwood Falls with burial to follow in the Vesta Cemetery. Visitation will be held from 4:00 p.m. until 7:00 p.m. on Wednesday, November 10, 2021, at Nelson-Hillestad Funeral Home, Redwood Falls, and will continue from 9:30 am to 10:30 am on Thursday, November 11, at the Evangelical Free Church. Loving husband, dad, grandpa and great-grandpa, Lauren Delbert Krause, 75, of Redwood Falls went to be with Jesus on November 5, 2021. He passed away suddenly at his home and leaves behind the legacy of a man who lived life very well. Lauren, the son of Wayne Krause and Ellenora Cordelia (Fixsen) Krause, was born December 21, 1945 in Montevideo. While he lived in many places during his younger years and when serving his country as a member of the U.S. Air Force, Lauren settled down and raised a family on his little piece of heaven on Earth in Sheridan Township, Redwood County. He was married to the love of his life Sandra “Sandy” Leatrice (Frikken) Krause June 24, 1967. Together they showed the world what it meant to live a marriage founded on the Christian faith for more than 40 years until Sandy’s death in August 2010. He graduated from Belview High School in 1964, also receiving his education in Hanley Falls, Vesta and in a Sheridan Township country school just up the road from the farm where he spent most of his growing up years, raised his family and it was in the same home where he took his last breath. A Vietnam veteran, Lauren enlisted in the United States Air Force in 1968 and served an 18-month stint in the Philippines as part of his service to his country. His work in the Air Force along with an electronics degree led to his career as a technician working for Control Data in the Twin Cities and Aberdeen, S.D., and he spent most of his 40-plus year career at the Redwood Falls plant working in the same building for Control Data, MPI, Zytec and Artesyn before retiring in 2009. Not only did he work at his town job, Lauren spent his off hours’ time farming often joking that his job in town not only supported his family but paid for his “farming habit.” A man of strong faith, Lauren was a student of God’s word and enjoyed theological discussions, especially related to the Nation of Israel, prophecy and the end times. He demonstrated that faith to his family and all who knew him. He truly left behind a legacy of faith. Lauren was also involved in faith organizations serving for a number of years as a board member for the Redwood Falls Youth for Christ program, and he also served for a number of years as a Gideon dedicated to sharing God’s written word with people all around the world. His family would like to express their profound gratitude to members of the CentraCare Ambulance Service of Redwood Falls, the Redwood County Sheriff’s Department and the Minnesota State Patrol for their heroic efforts in trying to revive him. He is survived by his three children Vaughn, Troy (Kelly) Krause and Carmen (Christopher) Bengtson, as well as his grandchildren, Hannah, Nathaniel and Samuel Krause, Naomi (Wyatt) Elgard, Caleb, Miriam, Amos, Anna, Martha and Gideon Krause and Keegan, Rory, Eli and Jesse Bengtson and one great-grandchild Harvey Elgard. He is further survived by brothers- and sisters-in-law Steve (Donna) Frikken, Joni (Arnold) Salzbrun, Kathy Frikken and several nieces and nephews. He was preceded in death by his parents, wife Sandy, a sister Carol Gahler and brothers-in-law David Frikken and Will Gahler. In loving memory.

Lauren D. Krause, 75, of Redwood Falls died Friday, November 5, 2021 at his home. Funeral services will be held at 10:30 a.m. on Thursday, November 11, 2021 at the Evangelical Free Church in Redwood Falls with burial to follow in the Vesta Cemetery.... View Obituary & Service Information

The family of Lauren D Krause created this Life Tributes page to make it easy to share your memories.

Send flowers to the Krause family.