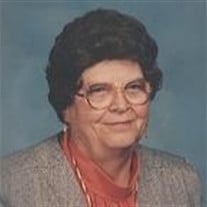 Laura Rose, 97, of Morgan died Saturday, September 3, 2011 at Gil-Mor Manor in Morgan. Funeral services will be held at 1 p.m. on Wednesday, September 7, 2011 from United Methodist Church in Morgan with burial in the Crestlawn Cemetery, rural Redwood Falls. Visitation will be held at the church on Wednesday, September 7, 2011, from noon until 1 p.m. Arrangements are with Nelson-Martin Funeral Service of Morgan. E-mail condolences may be sent via www.nelsonmartinfuneralservice.com. Laura Verna Rose, the daughter of Charles and Hulda (Zaske) Sandmann, was born Monday, October 6, 1913 in Eden Township, Brown County, Minnesota. She was raised on the family farm and received her formal education at the Evan elementary school. On June 28, 1935, Laura married Marvin Rose at the Morgan Methodist Church. The couple made their home in Brown County’s Prairieville Township where they raised their four children. In 1961, they moved to Eden Township where they lived until relocating into Morgan in 1979. Laura was a member of the United Methodist Church in Morgan where she served as a Sunday school teacher and a church board member. She also belonged to the United Methodist Women, the Gil-Mor Manor Auxiliary and the Brookville 49ers Extension group. She is survived by her children Sandra (Bernie) Torgerson of Granite Falls, and Darvin Rose of Clear Lake, Iowa; her daughter-in-law Karen Rose of Morgan; her son-in-law DuWayne Evenson of Minnesota Lake; 15 grandchildren; 14 great-grandchildren; and five great-great-grandchildren. She was preceded in death by her husband Marvin in October 1983; son Russell Rose; daughter Mary Lou Evenson; granddaughter Vicky Burdick; daughter-in-law Shelly Rose; brothers Elton, Wesley, and Victor Sandmann; and sisters Ruth Birkemeyer, and Gladys Rose. Blessed be her memory.

Laura Rose, 97, of Morgan died Saturday, September 3, 2011 at Gil-Mor Manor in Morgan. Funeral services will be held at 1 p.m. on Wednesday, September 7, 2011 from United Methodist Church in Morgan with burial in the Crestlawn Cemetery, rural... View Obituary & Service Information

The family of Laura Verna Rose created this Life Tributes page to make it easy to share your memories.

Send flowers to the Rose family.