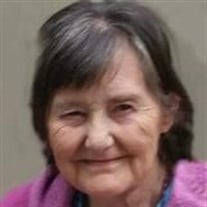 LaDonna Hollingsworth, 71, of Morton died Sunday, April 24, 2016 at Season’s hospice in Redwood Falls. Funeral services will be held at 10:30 a.m. on Friday, April 29, 2016 from Nelson-Hillestad Funeral Home in Redwood Falls with burial to follow in the Redwood Falls Cemetery. Visitation will be held Thursday, April 28, 2016, from 4 until 7 p.m., at Nelson-Hillestad Funeral Home in Redwood Falls and will continue on Friday, from 9:30 until 10:30 a.m., at the funeral home. Arrangements are with Nelson-Hillestad Funeral and Cremation Service of Redwood Falls. E-mail condolences may be sent via www.nelson-hillestad.com. LaDonna May Hollingsworth, the daughter of John and Glenna (Hall) Dokken, was born February 15, 1945 in Rapid City, South Dakota. She was later adopted by Richard and Velma Hollingsworth. LaDonna grew up in South Dakota and Minnesota. She graduated from high school in Warner, South Dakota and then attended the College of Cosmetology. On July 27, 1970, LaDonna married Steve Crooks; they were later divorced. LaDonna worked as a nurses’ aide, first at the Redwood County Nursing Home then Wood Dale Home. She later worked at Jackpot Junction and the Morton Inn. LaDonna loved doing jigsaw puzzles. She enjoyed going to the casino and playing Bingo; she loved anything to do with pandas. LaDonna is survived by her children Tonia Crooks (Chris) of Morton, Wendy Crooks (Andrew) of Morton, Sarah Crooks (Cheyenne Sr.) of Morton, and Brian Crooks of Redwood Falls; grandchildren Brianna, Cayden, Steven, Samantha, Chauncey, Tehya, Talan, Cheyenne Jr., Shylla, Kali, and Ivy; and niece and family LyBecca Shaunaman of South Dakota. She was preceded in death by her parents, and brothers Ronald Hollingsworth in November 2008 and Richard Dokken in September 2008. Blessed be her memory.

The family of LaDonna Hollingsworth created this Life Tributes page to make it easy to share your memories.

Send flowers to the Hollingsworth family.