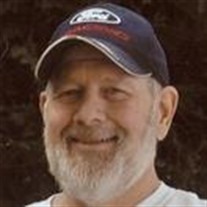 Kevin Gegner, 62, of Redwood Falls died at his home, following a courageous battle with cancer, on Monday, September 14, 2015. Funeral services will be held at 11 a.m. on Saturday, September 19, 2015 from Bethany Lutheran Church, near Gilfillan, with burial to follow in the church cemetery. Visitation will be held Friday, September 18, 2015, from 4 until 8 p.m., at Nelson-Hillestad Funeral Home in Redwood Falls and will continue on Saturday at the church from 10 until 11 a.m. In Kevin’s honor, please feel free to wear a bowling or racing shirt to the visitation and funeral. Arrangements are with Nelson-Hillestad Funeral Service of Redwood Falls. E-mail condolences may be sent via www.nelson-hillestad.com. Kevin Walter Gegner, the son of Frederick and Gloria (Schou) Gegner, was born April 9, 1953 in Sleepy Eye. He grew up in Morgan and received his formal education there. Following graduation from Morgan High School in 1971, Kevin attended Canby Vo-Tech where he received his degree in auto mechanics in 1973. He was most well-known for his time working at KLGR radio. On June 21, 1991, Kevin married Paulette Lange at Gloria Dei Lutheran Church and they made their home in Redwood Falls. He was previously married to Sue Schmidt. Kevin was an active member of Bethany Lutheran Church, holding all church offices over the years. He enjoyed his grandchildren, watching Minnesota sports, NASCAR, playing cards, and anything Ford. Kevin’s passions were stock car racing, bowling, and his daily Facebook blogs. Kevin is survived by his wife Paulette of Redwood Falls; mother Gloria Gegner of Morgan; children Stacy Carlson of Tracy, Amy (Dennis) McGowan of Franklin, Nathan (Jody) Gegner of Morgan, and Matthew Lange of Minneapolis; grandchildren Michael, Tyler, Tiffany, and Nicholas McGowan, Britney, Dillan, Abbigail, and Calleigh Gegner; sisters Bonnie (Rex) Welter of Morgan, and Darla (Brian) Sams of Redwood Falls; and sister-in-law Kim (Joe) Scanlan of Mendota Heights. He was preceded in death by his father Fritz Gegner, brother Randal, and son-in-law Brian Carlson. Blessed be his memory.

Kevin Gegner, 62, of Redwood Falls died at his home, following a courageous battle with cancer, on Monday, September 14, 2015. Funeral services will be held at 11 a.m. on Saturday, September 19, 2015 from Bethany Lutheran Church, near Gilfillan,... View Obituary & Service Information

The family of Kevin Walter Gegner created this Life Tributes page to make it easy to share your memories.

Kevin Gegner, 62, of Redwood Falls died at his home, following...

Send flowers to the Gegner family.