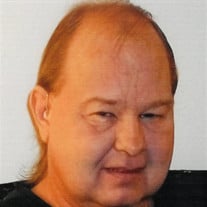 Kevin Dean Adams, age 59, of Mankato, formerly of Renville and Morgan, passed away from cancer on Wednesday, October 2, 2019, at Oaklawn Rehabilitation Center in Mankato. Funeral services will be held at 10:30 am on Saturday, October 12, 2019 from the United Methodist Church in Morgan with burial to follow in the Morgan City Cemetery. Visitation will be held from 9:30 until 10:30 am on Saturday at the United Methodist Church in Morgan. Arrangements are with Nelson-Hillestad Funeral and Cremation Service of Redwood Falls. E-mail condolences may be sent via www.nelson-hillestad.com. Kevin was born to Kenneth and Ruth (Piehl) Adams in Redwood Falls on July 28, 1960. He lived in Morgan, Minnesota and went to Morgan Public School from kindergarten through the 4th grade. He moved with his family to Renville, Minnesota, where he attended 5th through 9th grade. He was a member of the Renville United Methodist Church and was confirmed when he was in the 8th grade. Kevin moved back to Morgan with his family after his mother remarried in 1976. He attended senior high school at Morgan High School and was a member of the class of 1978. After high school, he worked with his grandfather Roy Piehl for about 3 years, working on a construction crew to build pole barns in Minnesota, Iowa, and South Dakota. He then attended Willmar Area Vocational Technical Institute in 1979-1980 to learn the craft of welding. He became a highly skilled precision welder. At the age of 21, Kevin was diagnosed with the early symptoms of schizophrenia. He battled the illness, but ultimately had to give up many of his lifelong dreams. He adjusted to his capabilities and needs and with the support of family and Blue Earth County case managers, was able to live in his own apartment in Mankato since 1990. He was employed by MRCI for 26 years, working in a variety of jobs until he retired in 2016. Kevin never complained about his difficult journey in life. He never lost his love for family and friends and for helping others when he could. He made new friends along the way, including his friend Randy Baker, who was Kevin’s “big brother” and case manager for over 20 years. During the last few years of his life, Kevin especially enjoyed spending time with his brother Keith, who had moved to Mankato in 2016. Kevin is survived by his mother, Ruth Malmstrom of Morgan, siblings - sister Cindy Coffin of Rosemount, Minnesota and brother Keith Adams of Mankato; brother-in-law Chip Coffin and niece Ginifer Coffin of Rosemount; and many aunts, uncles, and cousins. Kevin was preceded in death by his father, Kenneth Adams, step-father, Stanley Malmstrom, and his grandparents, Roy and Janna Piehl, and Carroll and Evelyn Adams. Blessed be his memory.

Kevin Dean Adams, age 59, of Mankato, formerly of Renville and Morgan, passed away from cancer on Wednesday, October 2, 2019, at Oaklawn Rehabilitation Center in Mankato. Funeral services will be held at 10:30 am on Saturday, October 12, 2019... View Obituary & Service Information

The family of Kevin Dean Adams created this Life Tributes page to make it easy to share your memories.

Kevin Dean Adams, age 59, of Mankato, formerly of Renville and...

Send flowers to the Adams family.