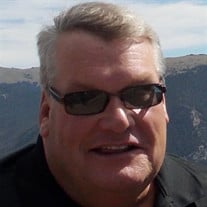 Kerry Lee Bendixen, age 56 years, 9 months and 18 days of Morgan, died Saturday, July 1, 2017 at North Memorial Medical Center, Robbinsdale, Minnesota. He fought a long and courageous battle against numerous health issues and wished to be an organ donor, but was unable due to the ravages of his physical ailments. Services will be held at 10:30 a.m. Saturday, July 8, 2017 at Bethany Lutheran Church near Gilfillan. Visitation will be held from 5 until 8:00 p.m. Friday, July 7, 2017 at the Nelson-Hillestad Funeral Home in Morgan and continue Saturday one hour prior to services in the church. Memorials are preferred in lieu of flowers to the Morgan Fire Department & Ambulance Service, the Arthritis Foundation, or Heifer International. Kerry was born September 13, 1960 in Sleepy Eye, Minnesota to Norman and Delores (Freyholtz) Bendixen. He grew up on the Bendixen family farm near Morgan, and attended Morgan Public Schools, graduating in 1979. After high school, he began his lifelong occupation of farming with his brother, Keith. He was a member of Bethany Lutheran Church near Gilfillan where he served as a trustee. He was involved in 4-H and FFA throughout his school years, and was a manager for the Morgan Raider basketball team. He received awards at the Minnesota State Fair in swine, and the AKSARBEN Stock Show and Junior Livestock Show in beef cattle. Kerry served on the Redwood County Pork Producers Board for a number of years. He was a well-respected farmer, and an avid Minnesota Gophers, Vikings and New York Yankees fan. Kerry was a beloved son, brother, brother-in-law, uncle and friend. He is survived by his father Norman Bendixen of Morgan, siblings Kevin (Carol) Bendixen of Lakeville, MN, Keith Bendixen of Morgan, Kendra (Tom) Still of Hudson, WI and Kristin Bendixen of Maplewood, MN, nephews Kyle Phipps of Murfreesboro, TN, James Phipps of Murfreesboro, TN, Eric Bendixen of Denver, CO, Aaron Still of Hudson, WI, Kevin Still of Hudson, WI, Alex Still of Hudson, WI, and niece Alexa Bendixen of Maplewood, MN. He is also survived by his friends at Harvest Land and his ice fishing buddies. Kerry was preceded in death by his mother, Delores Bendixen. Blessed be his memory. Arrangements are with Nelson-Hillestad Funeral and Cremation Service of Morgan. E-mail condolences may be sent via www.nelson-hillestad.com.

The family of Kerry Bendixen created this Life Tributes page to make it easy to share your memories.

Send flowers to the Bendixen family.