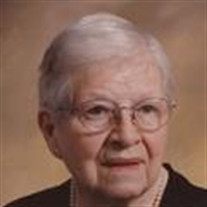 Kathryn Olson, 96, of Redwood Falls died Saturday, September 12, 2015 at Wood Dale Home in Redwood Falls. Mass of Christian Burial will be held at 11 a.m. on Friday, September 18, 2015 from St. Catherine’s Catholic Church in Redwood Falls with burial to follow in St. Mathias Catholic Cemetery, Wanda. Visitation will be held on Thursday, September 17, 2015, from 4 until 7 p.m., with a prayer service at 6:30 p.m., all at Nelson-Hillestad Funeral Home in Redwood Falls. Visitation will continue on Friday, from 10 until 11 a.m., at the church. Arrangements are with Nelson-Hillestad Funeral Service of Redwood Falls. E-mail condolences may be sent via www.nelson-hillestad.com. Kathryn Elizabeth Olson, the daughter of Lewis and Barbara (Drees) Olson, was born July 22, 1919 in Willow Lake Township, Redwood County. She grew up on the home place in Willow Lake Township. “I’m the third one of the ‘triplets’ – something I guess I accepted because my mother wanted it. So I was always in the same grade as Leone and Lucille and graduated from Lamberton High School at the same time. After high school graduation, I took the one year course at the Lamberton Teachers’ Training Department. In the fall of 1937 I began teaching in a rural school in Redwood County.” Kathryn commuted to work in the 1938 Chevy that her dad purchased for daughters Kathryn and Louise. Kathryn was always very proud that she owned a car from the age of 19 to 91. “I went to summer school at St. Cloud State College and continued teaching in the rural schools until 1949. After attaining my two year certificate, I was qualified to teach in ‘town schools’.” From 1949-52 I taught third and fourth grade in Sanborn. In the summer of 1952, after a call from Reede Gray, Superintendent of Redwood Falls Schools, I consented to teach kindergarten. But I needed special endorsement for that, so I went out to Colorado State College at Greeley, Colorado, that next summer to earn it. I continued another summer there and then, through night classes and summer school, I attained the coveted Bachelor’s Degree. I taught kindergarten here in Redwood Falls for 29 years, retiring in June 1981.” Kathryn was a member of St. Catherine’s Catholic Church and the CCW. She taught religious education for many years and received the Papal blessing during a trip to Rome. In her spare time she enjoyed doing crossword puzzles, playing Bridge, being involved in study club, and attending retired teachers’ luncheons with her friends. Kathryn was an avid reader and shared that love of reading with her family. She also was an avid traveler and loved to share slides of her trips. Kathryn was a contributing supporter of “Dollars for Scholars” as her passion for education was unlimited. She was inducted into the Redwood Valley Hall of Fame in 2004 – which was a humbling experience. Kathryn is survived by her sister-in-law Mary A. Olson of Redwood Falls, nieces, nephews, and a host of friends. She was preceded in death by six brothers and six sisters. Blessed be her memory.

The family of Kathryn Elizabeth Olson created this Life Tributes page to make it easy to share your memories.

Send flowers to the Olson family.