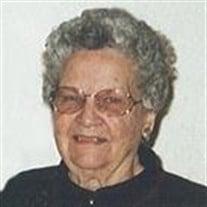 Kathleen “Kay” Stokesbary, 91, of Redwood Falls passed away Wednesday, July 4, 2012 at Renville County (R/C) Hospital in Olivia. Funeral services will be held at 10:30 a.m. on Monday, July 9, 2012 from United Methodist Church in Morgan with burial to follow in Crestlawn Gardens, rural Redwood Falls. Visitation will be held at the church on Sunday, July 8, 2012, from 5 until 8 p.m., and will continue at the church on Monday from 9:30 until 10:30 a.m. Arrangements are with Nelson-Martin Funeral Service of Morgan. E-mail condolences may be sent via www.nelsonmartinfuneralservice.com. Kathleen Adeline (Cole) Stokesbary, the daughter of Albert L. and Johanna (Loe) Cole, was born November 8, 1920 in Sandes Township, Yellow Medicine County. She was the sixth of nine children who were raised on the Cole farm. Kay was baptized and confirmed in the Yellow Medicine Evangelical Lutheran Church in Hanley Falls. She attended country school through the eighth grade and graduated from Hanley Falls High School in 1938. Kay attended Minneapolis Business College and a school for aviation metal work where she met her future husband, Marvin. Kay worked for Munsingwear until World War II broke out. She then worked as a “Rosie the Riveter” at the McDonell-Douglas aircraft plant in Wichita, Kansas and then transferred to the McDonell-Douglas aircraft plant in Santa Monica, California, where she worked the graveyard shift until the end of the war in 1945. Marv and Kay dated through letters while he was in the Navy ¬– stationed in Hawaii – and were married on June 30, 1945, six months before his discharge from the Navy. They lived and farmed in several areas in Minnesota – Mankato, Wells, Morgan and Redwood Falls. Kay enjoyed the animals, especially using the “egg money” for family needs. She also enjoyed sewing, canning, crocheting and baking for her family. After she became a grandmother, Kay crocheted afghans and sewed blankets for all the grandchildren. In her younger years, Kay ran tractors, cleaned the milking equipment, and made many lunches for the men who worked her and Marv’s fields. She also made lunch for the people who purchased DeKalb seed, feed, and Badger products from them. Kay also worked for Zytec in Redwood Falls. In 2006, Kay and Marv moved to Garnette Gardens in Redwood Falls from their building site near Redwood Falls. Kay also enjoyed living in Wood Dale Home in Redwood Falls and Golden Living Center in Olivia. She was an active member of the United Methodist Women, Sunshine Club, and New Horizon Club in Morgan. Kay was active as a leader in the Golden Gopher 4-H Club. She enjoyed her “Ole and Lena” jokes; she clipped their jokes and would pull them out at gatherings for a good laugh. Kay loved music and played the piano, organ and harmonica. She loved watching the Lawrence Welk and Robert Schueller television programs. Kathleen is survived by her sons Arlyn (Sandy) Stokesbary of Slayton, Ron (Janet) Stokesbary of Longville, and Curtis (Kathy) Stokesbary of Morgan; daughters Jody (Ron) Winter of Great Falls, Montana, and Mary (Randy) Koll of Belle Plaine; and son-in-law Henry Ripka of Owatonna. She is also survived by her 21 grandchildren; 19 great-grandchildren; and sisters Ardell Redetzke of Willmar, and Edith Timm of Bend, Oregon. She was preceded in death by her husband Marvin; her daughter Marilyn Ripka; brothers LaVerne, Donald, Virgil, Arvid, and Curtis; sister Jeverna Nelson; and her parents. Blessed be her memory.

The family of Kathleen "Kay" Stokesbary created this Life Tributes page to make it easy to share your memories.

Send flowers to the Stokesbary family.