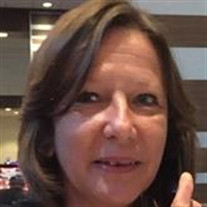 Juli R. Filzen, age 54, of Redwood Falls, died Thursday, September 26, 2019, at her home after a short illness. Memorial Mass will be held at 10:30 am on Wednesday, October 2, 2019 from the St. Catherine’s Catholic Church in Redwood Falls, with burial to follow in the St. Catherine’s Catholic Cemetery in Redwood Falls. Visitation will be held on Tuesday, October 1, 2019 from 4:00 pm until 7:00 pm with prayer service at 6:30 pm at the Nelson-Hillestad Funeral Home in Redwood Falls. Visitation will continue at the church from 9:30 until 10:30 am on Wednesday, October 2, 2019. Arrangements are with Nelson-Hillestad Funeral and Cremation Services of Redwood Falls. E-mail condolences may be sent via www.nelson-hillestad.com. Juli was born to Arvid and Bernice (Toop) Anderson on December 7, 1964. Juli was raised in and around St. George and the New Ulm areas. She attended New Ulm High School. After high school she went on to receive her Nurses Degree, working at various facilities and nursing homes. She was a true caregiver. Later she opened P & J Framing shop in Gibbon and also was a partner and bookkeeper at Gibbon Lumber and Hardware for many years. In 2016, Juli met Dan Filzen, they immediately hit it off and fell deeply in love! Juli joined Dan at his home in Redwood Falls. They were married on August 2, 2018. Juli was an avid Minnesota Vikings fan throughout her whole life. While watching Vikings’ games on TV, she would try to communicate with the Vikings coach and players and at times became somewhat animated. She enjoyed feeding and watching birds, along with other animals in her back yard in Redwood Falls. She loved having visitors and grilling. She especially loved when grandchildren came to spend the weekend, whether it was playing card or board games, making snow angels in the front yard or drawing chalk figures in the drive way with them. Juli is survived by her husband, Dan, and the father of her children, daughter, Shanon Lott (special friend Jared Zamzow) of Lafayette, daughter, Jill (Joe) Eaton of Gibbon, son, Dustin Reinhart (special friend Cassie Torres) of Fairmont, and daughter, Anna (Eli) Hughes of New Ulm. Step-son, Dan Filzen of Granite Falls, step-daughter, Tina (Andrew) Korstad of Granite Falls and step-son Tim (Katie) Filzen of Hanover; 8 grandchildren and 6 step-grandchildren; sisters, Mavis (Roger) Anderson of Starbuck, Melodee (Keith) Jones of Erie, Colorado, Koni (Randy) Filzen of Courtland, Jody (Greg) Luckhardt of Balaton; and a brother, Kevin (Tina) Anderson of Illinois. She was preceded in death by her parents; brothers, Leroy (in infancy), Dayton, Duane and Kenneth Anderson. Blessed be her memory.

The family of Juli R. Filzen created this Life Tributes page to make it easy to share your memories.

Send flowers to the Filzen family.