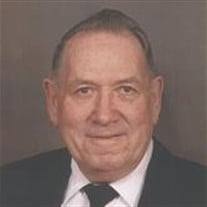 John Smith, 84, of Redwood Falls died Sunday, February 19, 2012 at his home. Memorial services will be held at 10:30 a.m. on Saturday, February 25, 2012 from First Presbyterian Church in Redwood Falls with inurnment to follow at the Redwood Falls Cemetery. Visitation will be held on Friday, February 24, 2012, from 4 until 8 p.m., at Nelson-Martin Funeral Home in Redwood Falls and will continue at the church on Saturday for one hour prior to services. The family requests that memorials be directed to Redwood Area Hospice, the American Cancer Society, or to the charity of the donor’s choice. Arrangements are with Nelson-Martin Funeral Service of Redwood Falls. E-mail condolences may be sent via www.nelsonmartinfuneralservice.com. John Coville Smith, the son of Donald and Irma (Mace) Smith, was born October 22, 1927 in Redwood Falls. He grew up in Redwood Falls and received his formal education here, graduating from Redwood Falls High School in 1945. John enlisted in the United States Army in 1945 and served in Northern Italy through the end of World War II. He was honorably discharged in 1947 at which time he enrolled in college in Illinois. John later transferred to Hamline University. On September 3, 1950, John married Virginia Olson at Gibbon and the couple made their home in St. Paul for two years. In 1953, they returned to Redwood Falls where they raised their family. John worked for Sanvig Plumbing and then Lee’s Electric in Redwood Falls. He then worked as an electrician for Brandt Electric in Olivia for over 30 years. He was a member of First Presbyterian Church in Redwood Falls where he served as an Elder and a Deacon; John also taught Sunday school. He belonged to the Redwood Falls Fire Department, the Lions Club, V.F.W., and Travelers Club. John logged many hours as a volunteer driver for Western Community Action. He is survived by his children John C. (Jay) Smith of Maple Plain, and Cheryl (Robert) Breth of Melrose; five grandchildren; his sisters Elizabeth (Lao) Stancer of Redwood Falls, and Dorothy Menk of Winona; and his special friend Marlene Beckwith of Redwood Falls. He was preceded in death by his wife Virginia in June 2006; his son Scott in January 2007; two brothers and three sisters. Blessed be his memory.

John Smith, 84, of Redwood Falls died Sunday, February 19, 2012 at his home. Memorial services will be held at 10:30 a.m. on Saturday, February 25, 2012 from First Presbyterian Church in Redwood Falls with inurnment to follow at the Redwood... View Obituary & Service Information

The family of John Coville Smith created this Life Tributes page to make it easy to share your memories.

Send flowers to the Smith family.