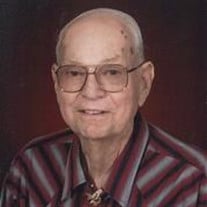 John Cronin, 81, of Franklin passed away, surrounded by his family, on Wednesday, January 25, 2012, at Seasons Hospice in Redwood Falls, following a year long struggle with cancer. Mass of Christian Burial will be held at 10:30 a.m. on Saturday, January 28, 2012 from Church of the Sacred Heart in Franklin. Visitation will be held at the church on Friday, January 27, 2012, from 4 until 8 p.m., and will continue on Saturday from 9:30 until 10:30 a.m. The family requests that memorials be directed to St. Patrick’s Birch Coulee Cemetery. Arrangements are with Nelson-Martin Funeral Service of Redwood Falls. E-mail condolences may be sent via www.nelsonmartinfuneralservice.com. John H. Cronin, the son of John and Anna (Mertensotto) Cronin, was born June 12, 1930 on the family farm in Bandon Township, Renville County. John graduated from St. Mary's High School in Bird Island in 1948 and later served the U.S. Army in England during the Korean War. John ran the family farm and was proudly awarded Century Farm status in 2005. He also served as a rural U.S. mail carrier for over 20 years. John was a board member for the St Patrick's Birch Coulee Cemetery in Bandon for over 50 years. John was a member of the Fairfax V.F.W. Post 8459 and was past commander and long time chaplain of the Franklin Legion Post 308. He was a member of the Franklin Lions Club for many years. John faithfully put up American flags for Catfish Days in Franklin and Memorial Day at several cemeteries. He enjoyed sports and was a Viking season ticket holder since 1966. John enjoyed square dancing, playing cards, chewing, and spending time with friends and family. John is survived by his brother-in-law Jerry Eisenbarth of Frankin; nieces Bonnie Splettstoeser of Savage, Geralyn (DeWayne) Lyle of Redwood Falls, Barbara (Ken) Goraczkowski of Fairmont, Jane (Jeff) Distad of Franklin, Kathy (Dick) Aarons of Plymouth, and Lisa (Jeff) Zamzow of Byron; nephews Keith (Karin) Menk of Salem Oregon, Kevin Menk of St Peter, Kurt Menk of Arlington, and Brad Wenner of St. Peter,; 12 great-nieces, 10 great-nephews, seven great-great-nieces; five great-great-nephews; and many other family and friends. John was preceded in death by his parents, John and Anna Cronin; his aunt Hannah Cronin (who helped to raise him from the age of 11 months when John's mother died); brother Patrick H. and infant brother Joseph; sisters Mary Eisenbarth and Margaret Menk; brother-in-law Ernie Menk; niece Yvette Wenner; and nephew-in-law Mark Splettstoeser. The family would like to thank Father Jeff Horesji and Sister Mary Ann Kuhn and the staff at the Redwood Area Hospital – especially the nurses at the Cancer Care Center and Seasons.

John Cronin, 81, of Franklin passed away, surrounded by his family, on Wednesday, January 25, 2012, at Seasons Hospice in Redwood Falls, following a year long struggle with cancer. Mass of Christian Burial will be held at 10:30 a.m. on Saturday,... View Obituary & Service Information

The family of John H Cronin created this Life Tributes page to make it easy to share your memories.

John Cronin, 81, of Franklin passed away, surrounded by his family,...

Send flowers to the Cronin family.