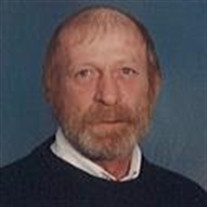 Joseph “Joe” N. Heiling, 66, of Morgan died Wednesday, December 5, 2012 at Abbott-Northwestern Hospital in Minneapolis. Mass of Christian Burial will be held at 11 a.m. on Tuesday, December 11, 2012 from St. Michael’s Catholic Church in Morgan. Burial, with military honors, will follow in the church cemetery. Visitation will be held Monday, December 10, 2012, from 4 until 8 p.m., with a prayer service at 4:30 p.m., all at the Nelson-Martin Funeral Home in Morgan. Visitation will continue on Tuesday at the church for one hour prior to services. Arrangements are with Nelson-Martin Funeral Service of Morgan. E-mail condolences may be sent via www.nelsonmartinfuneralservice.com. Joseph Nicholas Heiling, the son of Alois and Evelyn (Heiderscheidt) Heiling, was born March 31, 1946 on the family farm south of Morgan. Joe grew up in the Morgan area and received his formal education in Morgan schools. He enlisted in the United States Navy on June 4, 1964 and was stationed aboard the USS Arlington in Portsmouth, Virginia. Joe was transferred to the Naval Reserve in 1967 and honorably discharged on June 4, 1970. On April 13, 1971, Joe married Debra Okins and they resided in Morgan. Before starting his own masonry business, Joe and his brothers operated Heiling Brothers Construction. He also worked for Jesco Construction for two years. Joe was a member of St. Michael’s Catholic Church in Morgan. He particularly enjoyed golf and bowling. He was very proud of the 300 game he bowled on December 10, 2003. Joe enjoyed spending time with his friends and family – especially his grandchildren. He also enjoyed watching sports and reading the newspaper. He is survived by his wife of 41 years, Deb of Morgan; his daughter Jenny (Scott) Hillesheim and their sons Jordan, Alex, Bailey, and Spencer Hillesheim of Sleepy Eye; and his son Jeff (Melonie) Heiling and their children Vishé and Arynzi Rabb, and Brecken Heiling of Springfield. Also surviving are brothers Jim, and Jack (special friend Barb Fischer); sisters Jean Gareis, and Judy (Jerry) Huiras; mother-in-law Helen Okins of Redwood Falls; brothers-in-law Chuck (Deb) Okins, Mike (Joan) Okins, and Steve (Jodee) Okins; and many nieces and nephews. He was preceded in death by his daughter Jacqueline in infancy; his parents; father-in-law Vernon Okins; sister Janice Mohlenbrock; and brothers-in-law Elmer Gareis and George Mohlenbrock. Blessed be his memory.

The family of Joesph "Joe" Nicholas Heiling created this Life Tributes page to make it easy to share your memories.

Send flowers to the Heiling family.