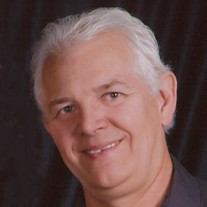 Jerry Christopherson, 57, of Morton passed away Thursday, May 11, 2017 at Season’s hospice in Redwood Falls. Memorial Mass will be held at 11 a.m. on Thursday, May 18, 2017 from St. John’s Catholic Church in Morton. Burial will follow in Calvary Cemetery, Morton. Visitation will be held on Wednesday, May 17, 2017, from 4 until 7 p.m., with a prayer service at 4 p.m., all at Nelson-Hillestad Funeral Home in Redwood Falls. Visitation will continue on Thursday, from 10 until 11 a.m., at the church. Arrangements are pending with Nelson-Hillestad Funeral and Cremation Service of Redwood Falls. E-mail condolences may be sent via www.nelson-hillestad.com. Jerry Alan Christopherson, the son of Marlyn and Mary (Klapprodt) Christopherson, was born August 31, 1959 in Clear Lake, South Dakota. He grew up in Brandt, South Dakota. Jerry graduated from Clear Lake High School in 1977 and Minnesota West Community and Technical College in 1979. On July 14, 1979, Jerry married Sherri Westbrook at St. Andrew’s Catholic Church in Granite Falls and they made their home in Redwood Falls and later rural Morton. Jerry was employed by Daktronics in Redwood Falls. He was an active member of St. John’s Catholic Church where he served as a trustee and volunteer. Jerry was an avid hunter and outdoorsman; he enjoyed outdoor activities of all kinds. Jerry also shared his interest in the outdoors as a Boy Scout leader. Jerry adored his family. Nothing made him happier than spending time surrounded by Sherri, his kids, and his grandkids. He is survived by his wife Sherri Christopherson of Morton; children Jason (Sarah) Christopherson of Eden Prairie, and Ashley Arntson of Plymouth; grandchildren Kane and Brynn Christopherson, and Jackson and Kenley Arntson; his parents Marlyn and Mary Christopherson; sisters Cheryl (Jack) Haugse of Rapid City, South Dakota, Trudy (Mark) Hastad of Madison, Minnesota; and brother Scott (Amy) Christopherson of Volga, South Dakota. Blessed be his memory.

The family of Jerry Christopherson created this Life Tributes page to make it easy to share your memories.

Jerry Christopherson, 57, of Morton passed away Thursday, May...

Send flowers to the Christopherson family.