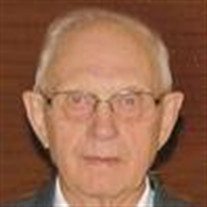 Jerome J. Kalkhoff, 88, of Clements died Sunday, February 28, 2016 at the Seasons hospice in Redwood Falls. Mass of Christian Burial will be held at 10:30 a.m. on Thursday, March 3, 2016 from St. Catherine’s Catholic Church in Redwood Falls. Burial, with full military honors, will follow in the St. Joseph Catholic Cemetery, Clements. Visitation will be held Wednesday, March 2, 2016, from 4 until 8 p.m., with Parish Prayer Service at 7 p.m., all at Nelson-Hillestad Funeral Home in Redwood Falls. Visitation will continue on Thursday, from 9:30 until 10:30 a.m., at the church. Arrangements are with Nelson-Hillestad Funeral and Cremation Service of Redwood Falls. E-mail condolences may be sent via www.nelson-hillestad.com. Jerome J. Kalkhoff, the son of Henry and Kathryn (Fangmann) Kalkhoff, was born May 6, 1927 on the family farm in Three Lakes Township, near Clements. He grew up on the farm and received his formal education in country school and in Wabasso High School. Jerome received his GED in 1956. On May 25, 1953, Jerome married Joan Plotz in St. Mary’s Catholic Church in Sleepy Eye and they lived on a farm near Clements. Jerome was inducted into the United States Army in March 1955 and he served in Korea until his honorable discharge in December 1956. He was a member of St. Joseph’s Catholic Church in Clements and served on the parish council. He belonged to the Clements Legion Post 519 for 60 years. Jerome was a member of the Clements Federal Credit Union board of directors and served as president for 18 years. He coached the Clements girls’ softball team to the county championship. Jerome was a life-long farmer and was passionate about the Clements area, old-time music, and his family. Jerome is survived by his wife Joan of Clements; children David of Clements, Stephen (Pam) of North Liberty, Iowa, Susan (Neal) Rohlik of Vesta, Denis of West St. Paul, Eugene of Madison, Karen Berkner of St. Michael, Jane (Gary) Wubben of Clara City, Jean (Bob) Neumann of Annandale, and Leon of Gibbon; 15 grandchildren; and six great-grandchildren – and one on the way. Also surviving are his sisters Rita (Francis) Goblirsch, Bernice Senkyr, and Beatrice Serbus; sister-in-law Dorothy Kalkhoff; brother-in-law Tom Plotz; and cousins in Iowa and Nebraska. He was preceded in death by his parents; in-laws; brothers Bernard and Ernest; nephews Kenneth and Kevin Kalkhoff; brothers-in-law Roger Senkyr and George Serbus; and sisters-in-law Louise Kalkhoff, Bernice Kalkhoff, and Phyllis Plotz. Blessed be his memory.

The family of Jerome J Kalkhoff created this Life Tributes page to make it easy to share your memories.

Send flowers to the Kalkhoff family.