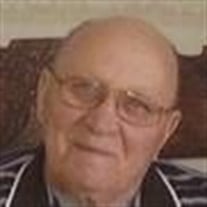 Jerome (Jerry) Deinken age 85 of Morton died Friday, May 5, 2017 in Wood Dale Nursing Home in Redwood Falls. Funeral services will be held at 11 a.m. on Tuesday, May 9, 2017 from First United Methodist Church in Redwood Falls. Burial, with military honors will follow in Morton City Cemetery. Visitation will be held Monday, May 8, 2017, from 4 until 7 p.m., at Nelson-Hillestad Funeral Home in Redwood Falls and will continue on Tuesday, from 10 to 11 a.m., at the church. Arrangements are with Nelson-Hillestad Funeral and Cremation Service of Redwood Falls. E-mail condolences may be sent via www.nelson-hillestad.com. Jerome “Jerry” Deinken was born October 9, 1931 in Home Township, Brown County, Minnesota to Alex and Hertha (Lochner) Deinken. He grew up in Home Township attending District 21 and 22 schools in Home Township. Jerry earned his GED in 1965. In 1945 he moved with his family to Bertha, Minnesota, then to Olivia in 1948 and to Renville in 1954. Jerry entered the U.S. Army on March 16, 1955 serving until March 15, 1957 He returned to Renville and was united in marriage to Harriet Reynolds on September 9, 1961 in Morton. They lived in Renville until moving to Birch Cooley Township in 1969 where he farmed until retiring in 1995. Jerry and Harriet moved into Morton in 1997. Jerry was a member of the United Methodist Church in Morton until it closed and they became members of First United Methodist Church in Redwood Falls. He served on the Harvest Land Cooperative Board of Directors for nine years, was a charter member of the Morton Lions Club, and drove school bus in the winter for Morton Public Schools. Jerry is survived by his wife Harriet of Morton; children Richard (Beth) Deinken of Olivia, Jeanne Deinken (special friend Tim Wolf) of Bloomington, Gary Deinken (partner Chris Gonzales) of Washington D.C., and Greg (Jill) Deinken of Morton; six grandchildren; three step-grandchildren; four great-grandchildren; and six step-great-grandchildren. Also surviving are his sisters-in-law Betty Gleisner of Hackensack, and Gordie Deinken of Sioux City, Iowa. He was preceded in death by his parents, a brother and two sisters. Blessed be his memory.

The family of Jerome "Jerry" Deinken created this Life Tributes page to make it easy to share your memories.

Send flowers to the Deinken family.