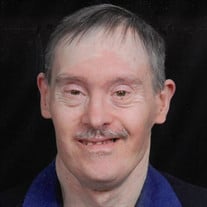 Jeffery Uhlenkamp of Redwood Falls died Sunday, August 22, 2021 at the age of 60. He passed away at his group home in Redwood Falls, under the care of REM and Hospice staff. Mass of Christian Burial will be held at 11 a.m. on Thursday, September 2, 2021 from St. Catherine’s Catholic Church in Redwood Falls with burial to follow in St. Catherine’s Catholic Cemetery, Redwood Falls. Visitation will be held Thursday, from 9 until 11 a.m., at the church. Arrangements are with Nelson-Hillestad Funeral and Cremation Service of Redwood Falls and Morgan. Email condolences may be sent via www.nelson-hillestad.com. Jeffery Francis Uhlenkamp, son of Francis and Dorothy Uhlenkamp, was born August 21, 1961 in Redwood Falls, Minnesota. Jeff attended Redwood Falls High School and graduated in 1982. Jeff cherished memories of growing up on the farm. His dog, Buff, and Jeff were inseparable. He spent his days outside finding and creating adventures. Jeff spent many fun summers at the lake home on Lake Minnewaska in Glenwood. He loved to swim and was a great fisherman. Jeff was employed at the Redwood Falls Hospital laundry department for 25 years. He also worked at Service Enterprises Industries for many years. He felt pride in his work and always looked forward to his paycheck. Jeff enjoyed traveling with his parents and family. He spoke often of his fun Caribbean cruise with Mom and Dad, his trip to see Lia in Fort Lauderdale, Florida, the road trip to Yellowstone National Park and Lisa‘s wedding in Oregon, and the trek to Banff, Canada plus many, many more fun trips. Jeffery enjoyed playing UNO, Go Fish, checkers and golfing. He loved Reese’s and Mountain Dew. He was active in the Special Olympics program and received numerous medals. He represented the Minnesota team in the 1983 International Summer Special Olympic games in Baton Rouge, Louisiana where he participated in the frisbee throw and the 50 meter race. Jeff developed a special bond with his housemates Robert, Mike and Tom at his group home. They were like the brothers he never had. He was well cared for and loved by his REM staff. For 60 years Jeff was a caring and loving son, brother, uncle, great uncle and friend to many. His laugh, smile and teasing will be missed by all the people he touched. Never a harsh word spoken, his big heart and alligator tears made him loved by all. Jeff is survived by his loving family- sisters Nancy (Bob) Hanna of Morton, Gail (Rick) Feriancek of Alexandria, Lynn (Scott) Brabec of Elk River, and Diane (Dan) Ortendahl of New Prague; nieces and nephews Lori (Larry) Goelz of Pipestone, Lisa (Chris) Warner of Stillwater, Scott (Tina) Hanna of Wabasso, Lia Feriancek of Chico, California, Dave (Michelle) Feriancek of Saint Joseph, Joe (Samantha) Brabec of Otsego, Alysia (AJ) Smith of Plymouth, Megan (Jed) Felix of Fargo, North Dakota, Sarah (Adam) Tupa of Rosemount, and Jennifer (Patrick) Crawford of Saint Paul. Jeff also has many surviving great nieces and nephews- Brooklyn, Kaitlyn, and Jack Goelz of Pipestone, Amelia and Garin Warner of Stillwater, Madeline, Sophia, Calvin and Grace Hanna of Wabasso, Kennedy Feriancek of Saint Joseph, Leo Brabec of Otsego, Cayden Smith of Plymouth, Melody Ortendahl of Burnsville, Izak, Brody, and Logan Tupa of Rosemount, and McLane Crawford of Saint Paul. Lois Boschert of New Hope is Jeff’s only surviving aunt. Jeff was preceeded in death by his parents, and sister Kathryn Lynn.

Jeffery Uhlenkamp of Redwood Falls died Sunday, August 22, 2021 at the age of 60. He passed away at his group home in Redwood Falls, under the care of REM and Hospice staff. Mass of Christian Burial will be held at 11 a.m. on Thursday, September... View Obituary & Service Information

The family of Jeffery F. Uhlenkamp created this Life Tributes page to make it easy to share your memories.

Send flowers to the Uhlenkamp family.