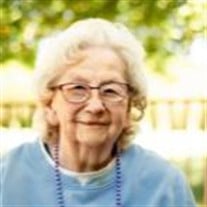 Jeanette Mae Butcher, age 97, of Morgan, passed on to heaven on Wednesday, September 22, 2021. Memorial Services will be held on Wednesday, September 29, 2021 at 10:30 a.m. at St. John’s Lutheran Church in Morgan, with burial in St. John’s Lutheran Cemetery. Visitation will be Wednesday, September 29 from 9:30 – 10:30 a.m. at St. John’s Lutheran Church Arrangements are with Nelson-Hillestad Funeral and Cremation Service of Redwood Falls & Morgan. E-mail condolences may be sent via www.nelson-hillestad.com. Jeanette Mae Butcher the daughter of Paul and Mable (Schliemann) Friedrich was born on August 10, 1924 in Morgan. She grew up in Morgan and began her education at District 99 near the farm place. 8 grades there and 4 years in high school, graduating in 1942. Jeanette worked at Temple Store and at the Morgan Locker after she was married. She also cooked at the Morgan Public School for 25 years and after that at Gil Mor Manor in the laundry for 13 years. On June 18, 1944 she married Eugene Butcher at St. John’s Lutheran Church in Morgan. They lived in Morgan, Fergus Falls, Clitherall and the last years in Morgan. Jeanette and Eugene had 5 children, Paula, Audrey, Clair, Lamont and Myles. Losing Paula due to a car accident in October 1967. Jeanette loved baking, especially known for her buns. She also worked as church secretary, church janitor besides her other jobs and house cleaning. She was a member of St. John’s Lutheran Church, where she was Ladies Aid secretary and was on the funeral committee and worked at sandwich suppers. Jeanette’s special interests were bowling (at the bowling alley in Morgan), loved setting all sizes of puzzles, playing bridge and Hand & Foot with her 3 friends in the EDA apartments, where she lived since 2009. Jeanette is survived by her children – Audrey (Robert) of Kennesaw, Georgia, Clair (Lisa) of Willmar, Lamont of New Ulm, Myles (Mary Kay) of Brownton and numerous grand and great grandchildren. Jeanette was preceded in death by her husband Eugene in 1987, by her daughter, Paula in 1967, her parents, Paul & Mable Friedrich, her brother, Lawrence and wife Carol, sister, Leola and husband Bill. Blessed be her memory.

The family of Jeanette Mae Butcher created this Life Tributes page to make it easy to share your memories.

Jeanette Mae Butcher, age 97, of Morgan, passed on to heaven...

Send flowers to the Butcher family.