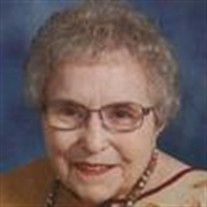 Jean Stephany, 90, of Redwood Falls died Saturday, December 5, 2015 at Sholom Hill East in St. Paul. Mass of Christian Burial will be held at 10:30 a.m. on Friday, December 11, 2015 from St. Catherine’s Catholic Church in Redwood Falls with burial to follow in the church cemetery. Visitation will be held on Friday, from 9:30 until 10:30 a.m., at the church. Arrangements are with Nelson-Hillestad Funeral Service of Redwood Falls. E-mail condolences may be sent via www.nelson-hillestad.com. Jean Louise Stephany, the daughter of Erwin and Irene (Forster) Stephany, was born April 5, 1925, in Pittsburgh, Pennsylvania. She moved at age five with her family to Dallas, Texas and then to Redwood Falls, Minnesota when she was 10. Jean graduated from Redwood Falls High School in 1943, valedictorian of her class. In 1947, she graduated valedictorian from the College of St. Teresa in Winona, where she earned a BA degree with majors in Math and Music and minors in Physics and Education. Her teaching career began at Purdue University, Lafayette, Indiana where she taught college engineering students while she pursued a masters’ degree in math. She also studied at the MacPhail School of Music, Arizona State University, the University of Fribourg in Switzerland, and obtained her masters’ degree in music at Colorado State University in Greeley. During her teaching career, Jean taught both math and music to all grades from kindergarten through college taking her from Purdue University and Scottsdale, Arizona to Minnesota where she taught in Olivia, Jackson, Redwood Falls and Wabasso. Jean retired from professional teaching in 1985, but continued to teach music and direct children’s and adult choirs and serve as organist at St. Catherine’s Church in Redwood Falls. Jean enjoyed extensive travel throughout the US and Europe with family and friends, including trips to Ireland, Czechoslovakia, Switzerland, Portugal and the Holy Land. She was often a guest speaker at organizations, sharing stories and pictures of her travels. Jean was a member of many organizations, both professional and social, and loved a good game of bridge. Jean also loved spending time with her friends and visits from her many relatives. She moved to Garnette Gardens in Redwood Falls several years ago where she continued to enjoy an active social life. Jean is survived by her sister Nancy (Ken) Tetrick; nine nieces and nephews; 23 grand-nieces and nephews, 13 great-grandnieces and nephews; and many other relatives and friends. She was preceded in death by her parents, Erwin and Irene (Forster) Stephany, and her brother and sister-in-law Don and Elaine Stephany. Blessed be her memory.

The family of Jean Louise Stephany created this Life Tributes page to make it easy to share your memories.

Send flowers to the Stephany family.