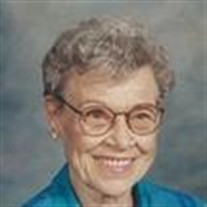 Jean Carruth, 84, of Redwood Falls died Wednesday, March 16, 2011 at her home. Funeral services will be held at 10:30 a.m. on Saturday, March 19, 2011 from Gloria Dei Lutheran Church with burial to follow in the church cemetery. Visitation will be held Saturday, from 8:30 until 10:30 a.m., at the church. Arrangements are with Nelson-Martin Funeral Service of Redwood Falls. E-mail condolences may be sent via www.nelsonmartinfuneralservice.com. Jean Avis Carruth, the daughter of Peter and Josephine (Antonson) Myra, was born March 29, 1926 in Granite Falls. She grew up in the Granite Falls area and received her education there, graduating from Granite Falls High School in 1944. Later, Jean moved to Seattle, Washington with her mother and sister where she worked at the Boeing plant for a year as part of the war effort. In 1947, Jean returned to Minnesota and moved to Redwood Falls where she was employed as chief operator at the telephone company. After 30 years of service, she retired from the phone company in 1981. On June 25, 1950, Jean married Marvin “Mike” Samuel Carruth and they made their home in Redwood Falls. The couple moved to St. Cloud in 1973, then returned to Redwood Falls in 1985. Jean was a member of Gloria Dei Lutheran Church. She belonged to the Telephone Pioneers and volunteered at the Redwood Area Food Shelf. Jean was an avid reader and enjoyed politics. She loved spending time with family and friends and always remembered family member’s birthdays. Jean is survived by her children Debra (Joe Thomas) Steinkraus of Eden Prairie, Sandra Schafer of Shoreview, Steve Carruth of St. Cloud, and Mick (Jeannine) Carruth of Eau Claire, Wisconsin; 11 grandchildren; and 10 great-grandchildren. She was preceded in death by her husband Marvin in April 1997, and her sister Doris Anderson. Blessed be her memory.

Jean Carruth, 84, of Redwood Falls died Wednesday, March 16, 2011 at her home. Funeral services will be held at 10:30 a.m. on Saturday, March 19, 2011 from Gloria Dei Lutheran Church with burial to follow in the church cemetery. Visitation will... View Obituary & Service Information

The family of Jean Avis Carruth created this Life Tributes page to make it easy to share your memories.

Send flowers to the Carruth family.