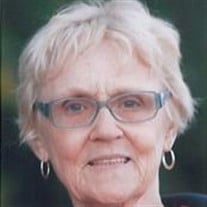 Janet U’Ren, 76, of Morton died Sunday, February 12, 2012 at the Redwood Area Hospital. A Memorial Mass will be held at 10 a.m. on Friday, February 17, 2012 from St. Catherine’s Catholic Church in Redwood Falls. Burial will be in St. Patrick’s Birch Coulee Cemetery at a later date. Visitation will be held on Thursday, February 16, 2012, from 4 until 7 p.m., with a prayer service at 7 p.m., all at the church. Visitation will continue on Friday for one hour prior to services. Arrangements are with Nelson-Martin Funeral Service of Redwood Falls. E-mail condolences may be sent via www.nelsonmartinfuneralservice.com. Janet Fay U’Ren, the daughter of William and Gena (Erickson) Maurer, was born May 14, 1935 on the family farm in North Star Township, Brown County. She was raised in the rural Springfield area. Janet received her formal education in Springfield schools, graduating from Springfield High School in 1953. On November 30, 1953, Janet married Kenneth R. “Corky” U’Ren in the parish hall in Franklin. They raised their children in Franklin and Morton and later spent some time in Mesa, Arizona. Janet was a nanny in Arizona and a caregiver all of her life. She was concerned with everyone else, even until a few days before her death. She was a member of the Area Faith Community of St. Catherine’s Catholic Church in Redwood Falls and St. John’s Catholic Church in Morton where she served with the Altar and Rosary Society and as CCW president. Janet was an avid bridge player and belonged to the Franklin Ladies Bridge Club for nearly 50 years. She was also active in the Lions Club and, when her children were younger, Janet served as a 4-H leader. As her husband’s partner, Janet supported various business ventures. She is survived by her husband Kenneth “Corky” U’Ren of Morton; and her children Paul (Linda) U’Ren of Willmar, Michael (Linda) U’Ren of Redwood Falls, Peter (Patricia) U’Ren of Redwood Falls, and Gina (Michael) Duck of Franklin. Also surviving are her grandchildren Lee (Jennifer) U’Ren, Michelle (Nick) Johnson, Traci U’Ren, Stacie U’Ren, Michael (Alexis) U’Ren, Mark U’Ren, Naomi U’Ren, Leif U’Ren, Chad U’Ren, Noah U’Ren, Andrea Duck and Sara Duck; her great-grandchildren Samantha, Shawn, and Paul U’Ren, Devan Johnson, and Brandon Abbot; her sisters Doris Guse of Two Harbors, and Shirley (Richard) Wohlrabe of Deer River; and her sisters-in-law Bernice Maurer and Lucille Maurer, both of Springfield. Janet was preceded in death by her parents; her brothers Dorvin Maurer and Wallace “Ole” Maurer; her sister Delores “Bebe” Woehrman; and brothers-in-law Leo Woehrman and Ernie Guse. Blessed be her memory.

The family of Janet Fay U'Ren created this Life Tributes page to make it easy to share your memories.

Send flowers to the U'Ren family.