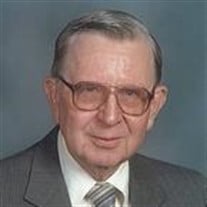 James “Jim” M. Olson, 85, of Belview died Tuesday, April 24, 2012 at Parkview Home in Belview. Funeral services will be held at 1 p.m. on Friday, April 27, 2012 from Grace Lutheran Church in Belview with burial to follow in Crestlawn Gardens, rural Redwood Falls. Visitation will be held Friday, from noon until 1 p.m., at the church. Arrangements are with Nelson-Martin Funeral Service of Redwood Falls. E-mail condolences may be sent via www.nelsonmartinfuneralservice.com. James Olson, the son of Jacob and Milda (Hagen) Olson, was born January 28, 1927 in Belview. He received his formal education in Belview Public School, graduating from high school with the Class of 1945. Very shortly after graduation, Jim was drafted into the United States Army where he served with the 9222 TSO TC Ships Company in the Asiatic Pacific Theater. Following his honorable discharge in 1946, Jim returned to Belview where he worked for Gryting Implement and with his uncle in the cabinet making business. In 1958, James began his employment with Redwood County Highway Department where he worked as an engineer until retiring in 1985. In May 1961, James married Alice Kasier. They had one daughter, Julie Marie Olson. James enjoyed hunting, fishing, gardening, building things, and spending time with family and friends. He is survived by his brothers Charles (Shirley) Olson of Brookings, S.D., and Talbert Olson of Belview; a sister Anna (Arlan) Roline of Bemidji; and many nieces and nephews. He was preceded in death by his parents, his wife, and his daughter in 1976. Blessed be his memory.

The family of James "Jim" Olson created this Life Tributes page to make it easy to share your memories.

Send flowers to the Olson family.