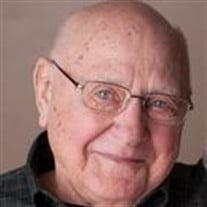 James “Jim” Jacoby, 84, of Clements died Thursday, April 28, 2016 at North Memorial Hospital in Robbinsdale. Mass of Christian Burial will be held at 10:30 a.m. on Tuesday, May 3, 2016 from St. Anne’s Catholic Church in Wabasso. Burial, with military honors will follow in St. Joseph’s Cemetery, Clements. Visitation will be held at the church on Monday, May 2, 2016, from 5 until 8 p.m., with a prayer service and rosary at 8 p.m. Visitation will continue at the church on Tuesday from 9:30 until 10:30 a.m. Arrangements are with Nelson-Hillestad Funeral and Cremation Service of Redwood Falls. E-mail condolences may be sent via www.nelson-hillestad.com. James Jacoby, the son of Elmer and Ledwina (Schottenbauer) Jacoby, was born July 22, 1931 in Redwood County. He grew up on the family farm near Clements and received his elementary education in Clements. Jim graduated from Springfield High School in 1949 and then farmed until he was inducted into the United States Army in 1952. He served during the Korean Conflict and was honorably discharged in 1954. In 1953, Jim married Lorraine Schulz at St. Joseph’s Catholic Church in Clements. Following his discharge from the army, Jim returned to farming. He continued to farm, and later helped his children farm, his entire life. Jim was an active member at St. Joseph’s parish and served as an usher and board member. He was also an active member of the John Watson American Legion Post 519 for 58 years. His hobbies included wine and beer making, woodworking, camping, cooking, and making his famous barbeque chicken. Jim’s favorite times were those spent with his grandchildren and great-grandchildren. He is survived by his wife of 63 years, Lorraine; daughter Marilyn (Leonard) Woelfel of Mankato; son Michael (Carol) Jacoby of Clements; daughter Sherry (Bruce) Plaetz of Wabasso; 10 grandchildren; 13-1/2 great-grandchildren; and siblings Richard Jacoby of Redwood Falls, Kathryn Moe of Springfield, and George Jacoby of Henderson, Nevada. Jim was preceded in death by his son Jack, infant great-grandson Jacob Thomas Woelfel, parents Elmer and Ledwina, infant brother John Robert, and sister Donna Talley. Blessed be his memory.

The family of James "Jim" Jacoby created this Life Tributes page to make it easy to share your memories.

Send flowers to the Jacoby family.