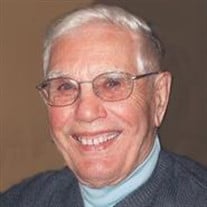 Isidore Henry Kuelbs, 96, of Redwood Falls, much loved father and grandfather entered into eternal life on April 23, 2012 surrounded by his loving children. Mass of Christian Burial will be held on Saturday, April 28, 2012 at 11:00 AM at St Catherine’s Catholic Church in Redwood Falls. Visitation will be held at the church on Saturday April 28, 2012 from 9:00 until 11:00 AM. The Nelson-Martin Funeral Service of Redwood Falls is handling the arrangements. E-mail condolences may be sent to the family via www.nelsonmartinfuneralservice.com. Isidore Henry Kuelbs, the son of Joseph and Barbara (Stitz) Kuelbs was born on January 16, 1916 in Three Lakes Township, Redwood County, near Clements on the family farm. He was the youngest of eight children. He attended primary school in Clements and graduated as Salutatorian from Wabasso Public High School in 1934. He attended the University of St. Thomas for one year on an academic scholarship. Because of the Depression, he was unable to continue his education and returned to the family farm. On February 20, 1946, Isidore married Irene Reiner Juenneman at St. Michael’s Catholic Church in Morgan. They settled on a farm in Sundown Township near Clements where, together, they farmed and raised their five children. Forty-one years later, in 1987, they retired from farming and moved to Redwood Falls. Throughout his lifetime, Isidore was an active member of St. Joseph’s Catholic in Clements, and St. Catherine’s Catholic Church in Redwood Falls. He was active in many ministries in the church. Isidore was a life long member of the Knights of Columbus. He enjoyed spending time with his family. He loved reading, playing a competitive game of cribbage, fishing, and watching sports. Isidore was a kind man with a gentle soul, full of love, and he handled life with grace. He had immeasurable strength and his positive attitude was rooted in his faith. He saw each day as a blessing. He was the essence of hope and believed that anything was possible. His determination paved his way in this world and he was an inspiration to many people. He taught his family the value of faith, education, and life. He will always have a place in our heart and his light will forever shine. Isidore is survived by his loving children Pamela Bratsch of Edina/Naples, FL, Douglas (Rita) Kuelbs of Clements, Jean (Steve) Ward of Darwin, and Brenda (Mike) Flinn of Redwood Falls; grandchildren Troy, Chad, Kara, Mandy, Cory, Peter, Hannah, Sarah, Katie, Brian, Marc and Kimberly; and great-grandchildren Ashley, Courtney, Isaac, Abigail, Beau, Braxton and Logan. He was preceded in death by his wife of 63 years, Irene Kuelbs; his son Michael Kuelbs, his parents Joseph and Barbara Kuelbs and his brothers and sisters Andrew Kuelbs, Catherine Klabunde, Thomas Kuelbs, Marie King, Alois Kuelbs, Roman Kuelbs and Clovis Kuelbs. Blessed be his memory.

Isidore Henry Kuelbs, 96, of Redwood Falls, much loved father and grandfather entered into eternal life on April 23, 2012 surrounded by his loving children. Mass of Christian Burial will be held on Saturday, April 28, 2012 at 11:00 AM at St... View Obituary & Service Information

The family of Isidore Henry Kuelbs created this Life Tributes page to make it easy to share your memories.

Send flowers to the Kuelbs family.