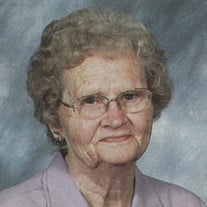 Iris Ann Nott passed quietly Friday, October 18, 2019 at Wood Dale Nursing Home in Redwood Falls, Minnesota with her daughters by her side. She was 92 years of age. Funeral Service will be held at 10:30 am on Thursday, October 24, 2019 at St. John Ev. Lutheran Church in Redwood Falls with Burial to follow in the Crestlawn Memorial Gardens. Visitation will be held from 4 until 7 pm Wednesday, October 23, 2019, at the Nelson-Hillestad Funeral Home in Redwood Falls. Visitation will continue on Thursday, October 24, 2019, at the church from 9:30 until 10:30 am. Iris was born in Martin County, Minnesota, on December 21, 1926, the only child of Ira Preston Slaughter and Anna (Kramer) Slaughter. She graduated as valedictorian of her Monterey High School class of 1944. She married George Hanson in 1946 and they had two children, Doug and Louise before their divorce some years later. On January 9, 1958 Iris was united in marriage to Lester Nott at St. John Evangelical Lutheran church in Redwood Falls where she has remained a member the past 61 years. Together they raised their four children Marie, Leslie, Dianne, and Laura Mae on their family farm outside of Clements in Willow Lake Township. Once her children left the nest, she joined the workforce at Zytec and Artysen. Those who knew Iris would describe her as kind and patient, which veiled a quiet inner strength and determined spirit. Iris enjoyed all aspects of being a homemaker and mother and life on the farm, including baking, gardening, canning, sewing and even occasionally rewiring a lamp or telephone line. She willingly opened her house and her heart to family and friends, and nobody ever left her house hungry, including the stray cats and dogs who wandered into the yard. She was a devoted church member and in her younger days was an organist and later taught Sunday School. Lester passed away in 2000, and Iris stayed alone on the farm until she was diagnosed with Parkinson’s disease and eventually moved to a nursing home in Redwood Falls in 2009. Her time at the home brought Iris a sense of community, where she found a sister she never had in Myrtle Bigger. She tended a small garden plot and enjoyed the many games and activities held there, and freely shared the occasional cooking lesson with the cooks. She is survived by her children and their spouses, Marie and Chris Figura of Eagan, Leslie and Kim Nott of Clements, Dianne and Doug Hatch of Redwood Falls, Laura Mae and Anthony Tipton of Mankato; daughter-in-law Karen Hanson of Colorado; stepchildren Darlene (Herb) Hennagir, New York Mills, Charlotte Tiffany of LaPuente, California, Phyllis Swanson of Balaton, Fern (Cletus) Trost of Wabasso, Leonard (Renee) Nott of Walnut Grove. Iris will be missed and loved by her many grandchildren and great grandchildren. She was preceded in death by husband Lester Nott, son Douglas Hanson, daughter Louise (Hanson) Hinkley and sister in law Ruth Nott. Blessed be her memory.

Iris Ann Nott passed quietly Friday, October 18, 2019 at Wood Dale Nursing Home in Redwood Falls, Minnesota with her daughters by her side. She was 92 years of age. Funeral Service will be held at 10:30 am on Thursday, October 24, 2019 at St.... View Obituary & Service Information

The family of Iris A Nott created this Life Tributes page to make it easy to share your memories.

Send flowers to the Nott family.