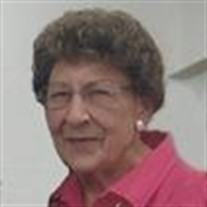 Irene Dittbenner, 90, of Morgan died Sunday, November 4, 2012 at Gil-Mor Manor in Morgan. Funeral services will be held at 11 a.m. on Wednesday, November 7, 2012 from Zion Evangelical Lutheran Church in Morgan with burial to follow in the church cemetery. Visitation will be held on Wednesday, from 10 until 11 a.m., at the church Arrangements are with Nelson-Martin Funeral Service of Morgan. E-mail condolences may be sent via www.nelsonmartinfuneralservice.com. Irene Ida Elnore Dittbenner, the daughter of Albert and Maria (Flugge) Luepke, was born October 17, 1922 in Echo. She was baptized on November 26, 1922 and confirmed May 24, 1936, both at Peace Lutheran Church in Echo. Irene grew up in rural Echo and received her formal education at District 18 rural school. Following her schooling, Irene moved to Minneapolis. She worked as a nanny in Minneapolis and in the Morgan area. On September 11, 1941, Irene married Leonard Dittbenner at Peace Lutheran Church and they made their home in Eden Township, Brown County, where they farmed. They retired from farming in 1980 and moved into Morgan. Irene was an active member of Zion Evangelical Lutheran Church in Morgan where she taught Sunday school and held all the offices in the Women’s Guild. She belonged to card club and was last living charter member of the Eden Homemakers Club. Irene was also active in the Gil-Mor Auxiliary. She loved gardening, needlework, and spending time with family and friends. Irene is survived by her sons Don (Lori) of Willmar, and Ken (Laurie) of Morgan; grandchildren Kevin (Jenny) Dittbenner, Katie (Loren) Swenson, Kristen (Nick) Bents, Adam (Jodie) Dittbenner, and Drew Dittbenner; great-grandchildren Noel and Abby Dittbenner, Faith and Ella Swenson, Mallory, Tyler, and Walker Bents, and Madison Jo and Lauren Dittbenner; and her sister Cordelia of Yakima, Washington. She was preceded in death by her husband Leonard in 2008; her brothers Ted, Otto, Ernest, Herbert, Gerhold, and Helmuth; and her sisters Ernestine, Leona, Verna, Dora, and Doris. Blessed be her memory.

Irene Dittbenner, 90, of Morgan died Sunday, November 4, 2012 at Gil-Mor Manor in Morgan. Funeral services will be held at 11 a.m. on Wednesday, November 7, 2012 from Zion Evangelical Lutheran Church in Morgan with burial to follow in the church... View Obituary & Service Information

The family of Irene Ida Dittbenner created this Life Tributes page to make it easy to share your memories.

Send flowers to the Dittbenner family.